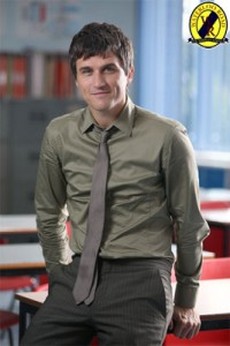 Gorgeous and oozing sex appeal, Christopher has got through life utilising his boy-next-door charm and personable demeanour, but there is something more substantial behind his laid-back façade.

Designer clad, Lexus-driving Christopher is a former commercial lawyer, who abandoned his champagne lifestyle a few years ago in search of something more meaningful and fulfilling.  He retrained as a science teacher and soon found himself zooming up the ranks to become Deputy Head.  Chris is a favourite both amongst the pupils and in the staffroom – no one can fault his dedication to his profession.  A brief relationship with Kim Campbell in series five soon ended when she had a baby from a previous relationship and felt the need to dedicate herself totally to motherhood.

Chris respects his new Head Karen both personally and professionally, especially after learning about her difficult family situation and the disappearance of oldest daughter Bex.  They present a united front throughout series six, in particular to the external criticisms levelled at Karen’s new single sex initiative.  But when Karen finds out that Chris inadvertently slept with her youngest daughter Jess before the start of term – will their professional partnership survive?  Chris’s whole career is at stake.

Karen saved Chris’s job at the end of series six, despite knowing that he’s unwittingly bedded her youngest daughter who was also a pupil at the school.  This series Chris continues to blur the pupil/teacher boundaries when he becomes moved by and heavily involved with a young pupil’s impoverished family.  Chris goes above and beyond the role of an educator and begins to veer into murky terrain - becoming more like a surrogate father to one pupil.