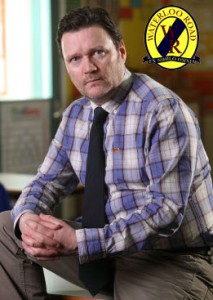 Charlie is still an attractive man, but he has always lived in wife Karen’s shadow.  As her career flourished, Charlie found his stopped, and he became a supply teacher.  He maintained his independence and the couple have always worked in different schools on his insistence.  Since the disappearance of their daughter, Bex, Karen and Charlie have grown apart and Charlie misses their old, more structured, home life.  He has felt increasingly neglected by Karen and whilst he cares deeply for his family, he feels he can’t be in a loveless, sexless marriage any more.

When we first meet him, Charlie has been having an affair with a teacher at his school for some time.  When Karen finds out Charlie agrees to end the affair, but the stress of the past couple of years has worn the love out of his marriage, and despite their trying to make it work for the children’s sake, the marriage collapses.