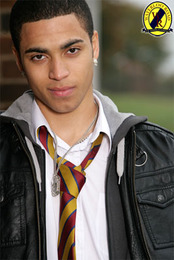 Named after the town of his conception (in the back of a transit van), Bolton has always been a thorn in the side of the teachers - when he did turn up to class he was generally empty handed and disruptive, often lasting only half the lesson before being packed off to the cooler. More often than not he didn’t bother coming to lessons, preferring to roam the corridors, spraying his graffiti ‘tag’ on the walls.  When Rachel Mason arrived at the school he was a prime target for her vocational education and ‘lessons for life’ – and with a bit of individual attention, has started to shine..  He’ll never be an Einstein, but he does have a certain gruff charm about him – not to mention a newfound enthusiasm for school - which Rachel and the others have warmed to. Bolton may well surprise them yet.

In Series 4, new PE Teacher Rob managed to ignite a passion in Bolton for boxing but after Rob should his true colours, Bolton backed away from the sport. These days he’s happy to just have a laugh with Paul Langley and hang around with his feisty girlfriend, Michaela.

But when he becomes mates with Sam he’ll start to love her competitive, fun loving nature. Always a slave to image Bolton’s not one to be seen dating younger girls, especially a tom-boy like Sam but as he’ll learn this term, it doesn’t do to worry too much about what other people think.