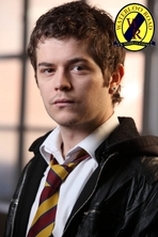 Aiden Scotcher is the wayward son of new Site Manager Rob. Built from a different mould than his reliable and stalwart father, Aiden completely takes after his absent mother; he’s a self-assured, incurable flirt who swaggers around convinced the world owes him a favour. It’s not that Aiden is a bad at heart, it’s just that life is kind to someone this good-looking and Aiden’s learnt he can usually get what he wants by turning on the charm with a cheeky wink or comment. Aiden is gifted academically and knows what he wants - to go to University and make something of himself. Despite this, Rob constantly pushes his son, determined that Aiden will have all the opportunity and advantages, which he squandered during his own youth. This pressure sometimes causes Aiden to rebel; he left his last school under a cloud, rumours abounded that he’d got more than one girl pregnant, but Rob is determined Waterloo Road will provide them both with the fresh start they need.

Aiden has been damaged by his flighty mother’s disappearance and as much as he moans about Rob’s overbearing attitude towards his education, they have an incredibly close relationship. When his mother, Naomi, returns expecting to pick up exactly where she left off with her family, Aiden finally appreciates how much his dad has had to cope with over the years.

Aiden and Ronan immediately hit it off. They have a lot in common: the same sense of humour and as it turns out a very similar taste in women…When Aiden meets Vicki his head is turned and whilst he backs off upon discovering she’s with Ronan, a seed has been sown. Aiden’s attentions are soon diverted by Vicki’s best mate, Jess, but will this be enough to keep Vicki and Aiden apart?