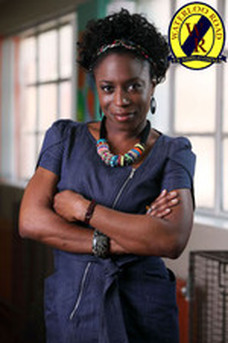 New Head of Pastoral Care is English teacher, thrice married Adanna Lawal. Adanna is third generation Nigerian. She has studied education after her first degree and there isn’t anything she doesn’t know about it from philosophers like Althusser to Baroness Cox to ‘that nonentity’, Ed Balls.  ‘God help us all.’ - as Grantly might say.
Adanna never knowingly understates. If there’s a problem - it’s massive.  If there’s a wayward child - s/he’s crazy bad.  If a teacher disagrees with her – s/he’s a total prat.   Adanna doesn’t make a good enemy but she makes a fantastic friend.  And friend she is to the many children in her care – no matter what names she calls them to their faces.  They come to like her straight-talking and they know where they are with her.  Adanna is determined to be there for everyone and defines her approach to being Head of Pastoral Care as having a truly 360 degree approach – as far as she’s concerned, she’s there to take care of everyone in the school, be they pupil, teacher or school seccy.

Nothing shocks her because Adanna’s childhood has been nothing short of horrendous.  Her own mother hated her and she still can’t fathom out why.  Because of this, there’s something of herself she keeps back from adult relationships – she’s much happier with children because she over-compensates for the way her mother treated her.

But Adanna is determined to see the best in everyone. It’s this warmth that makes her a popular addition to the SMT: warm, passionate and most importantly, approachable. Despite her histrionics, Adanna soon wins over most of the staffroom, including Cesca, and a firm friendship grows between the two teachers.  When Cesca struggles with her feelings for Jonah, it is close friend Adanna she wishes she could confide in – but deep down, Cesca knows no one will approve of what she’s doing. Cesca gets round this by telling Adanna a half truth - waxing lyrical about her blossoming romance without actually giving away who the guy in question is. Adanna’s trusting nature means she doesn’t question too much of what she’s being told and when the news about Cesca and Jonah blows up at the end of term, Adanna will be left feeling like a fool. So it is that the end of term finds a wiser, perhaps more cynical, Adanna determined to change her trusting ways – she’ll never be taken for a fool again.