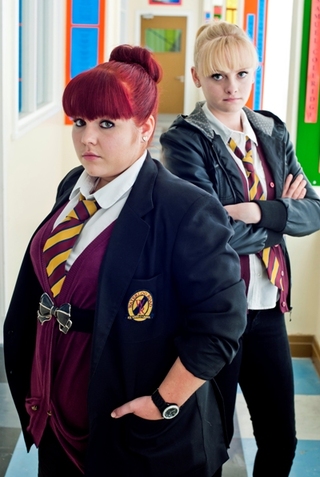 Rhiannon’s shocking secret is uncovered by Scout; Christine refuses to retract her bullying claims against Audrey; and Kevin jeopardizes his place at Waterloo Road to help Connor.

Waking from a nightmare, Rhiannon heads to the bathroom where she takes out a small tin. But before she can open it, she’s disturbed by rival Scout. Later, at school, Rhiannon finds a quiet spot and takes out the tin again revealing her self-harming kit.

Rhiannon’s disruptive behaviour in school is noted by Audrey who excludes her from class. Believing she’s compensating for her weight issues by acting the class clown, Audrey urges Rhiannon to join the lunchtime power-walking club.

However, when Rhiannon lags behind the others, Audrey asks Scout to look after her enemy. The girls bicker but soon start to joke around together. But the moment is short-lived after Scout notices blood on Rhiannon’s t-shirt. Making Scout promise not to tell anyone, Rhiannon confesses she cuts herself because it makes her feel better.

As Christine and Audrey’s bullying case reaches a climax they agree to mediation. But when Audrey admits some of her actions could be misconstrued, Christine seizes the opportunity to push the case further.

Elsewhere, new boy Kevin takes drastic action to gain credibility with Connor, threatening his future at Waterloo Road; while Lorraine presents Michael with a prospective new PA – Sonya. But unbeknownst to Michael, Sonya already has ties with the school.

Also this week, Sian is horrified to discover Billy has asked Michael to help his life. But she’s further concerned after realising Michael is seriously considering his father’s plea.