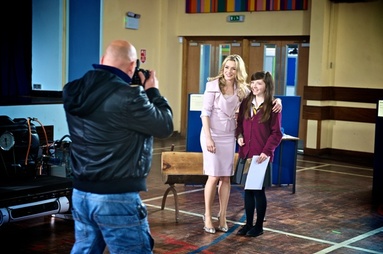 Dealing with quiet student Morag and her overbearing father, Michael decides to address his own family issues; Connor’s attempts to help his mum backfire with explosive consequences; and new boy Kevin makes an impact on Chalky.

Morag decides to take part in Lorraine’s bench design competition confiding in her little brother that, if she wins, their estranged mum might find out and get in touch with them.

When Tom turns up to collect Morag’s bench design, her father Kai can’t resist the opportunity to preach about his Freeganist, anti-money beliefs. But his moral high-ground becomes shaky when he learns the competition carries a substantial cash prize for the winner.

Enraged at his daughter’s deception, Kai forces Morag to destroy her handcrafted bench. Horrified, Tom decides to take matters into his own hands and secretly helps Morag design another bench, resulting in a clash of beliefs between Kai and Lorraine.

Connor attempts to help Christine by marking her late coursework but this backfires as he gives everyone a top grade. Suspicious, Audrey confronts Christine about the irregular grades, forcing the English to cover her tracks. Now considering Audrey the enemy within, Christine lodges a false complaint of bullying against her to Michael.

Later, when Connor finds his mother’s drinking again, he finds a potentially lethal outlet for his frustrations.

New boy Kevin turns up at Waterloo Road and quickly draws attention to himself not least from Chalky who suspects the schoolboy is more intelligent than he’s letting on.

Elsewhere, Madi tries to persuade Sian to let her spread her wings and leave school and Billy has a surprising request for Michael to consider.