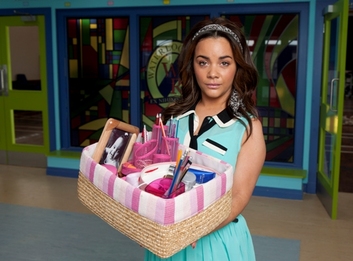 Janeece puts her career ahead of being a mother forcing Chalky to take drastic action; Rhiannon’s bullying campaign against Scout steps up a gear; and Christine is devastated by the consequences of her alcoholism.

Late for a meeting with Lorraine, Janeece leaves daughter Cheryl home alone. Later, Chalky discovers Cheryl crying having hurt herself. He rushes her to A&E but accidentally drops Janeece in it with social services.

Meanwhile, Janeece’s first attempt at being a PA goes well and Lorraine hints she’s always looking for new people to join her business.

Back at school, Michael is livid Janeece was lured away by Lorraine again. As he reprimands her, Janeece dashes off to the hospital without explanation not realising social services want to question her.

Returning to Waterloo Road, Janeece fumes that Chalky got her into trouble. Fed up being used and worried about Cheryl’s welfare, Chalky snaps delivering some much-needed home truths to Janeece.

The confrontation is a catalyst for change as Janeece makes some tough decisions about her future at Waterloo Road and her relationship with Chalky.

Rhiannon’s bullying of Scout intensifies as she frames her for stealing. Scout feels increasingly isolated as everyone appears to fall for Rhiannon’s ruse – including Maggie.

Elsewhere, Christine struggles after her doctor reveals she has alcoholic hepatitis. Fearful another drink could kill her, she immediately stops but soon suffers overwhelming withdrawal symptoms, witnessed by a full classroom.