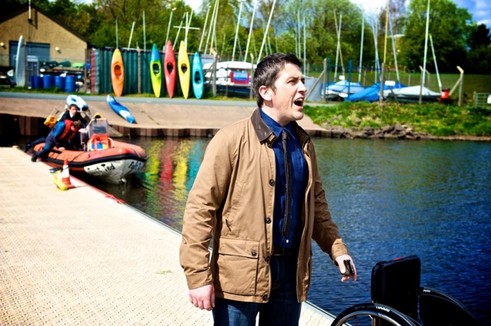 It’s the day of Tariq’s kayaking time trial but a steely focus hides his true intent; Michael is publicly confronted by his past; and Connor and Christine’s unhappy homelife spills into school.

Down about his disability, Tariq takes drastic action to regain control of his life. Deciding to remove all unnecessary distractions from his life, he gives Phoenix and Josh is prized possessions. Concerned, Josh confides in Tom but his father tells him not to worry.

Phoenix attempts to get Tariq to join in a fight with Gus and the Havelock High kids who have been playing pranks on the Waterloo Road schoolhouse. Tariq tells Phoenix life’s too short for petty fights. Josh probes Tariq about his out-of-character comments but his concern is misinterpreted as pity.

Tariq is unsettled when his friends say they’ll be at his kayaking trials. Desperate to go alone, he tricks Phoenix and Gus into arranging a fight with Havelock High as a distraction.

Alone at the harbour, Tariq’s true intentions are revealed leaving Tom and Michael with a race against time to stop his fateful plans.

Elsewhere, Gerard Findlay is on a mission to discredit Michael. Plastering an unsettling archive newspaper story about Michael’s past throughout the school, Gerard is caught red-handed by Grantly – but finds an unlikely ally within the Waterloo Road ranks.

As word of Michael’s former indiscretion circulate the school corridors, Lorraine is horrified by the news and Sian struggles to see Michael’s side of the story.

Also this week, Imogen snubs Connor leading him to believe she’s not interested; Christine clashes with Audrey when she shows concern for Connor’s homelife; and Madi takes a shine to new boy Gus.