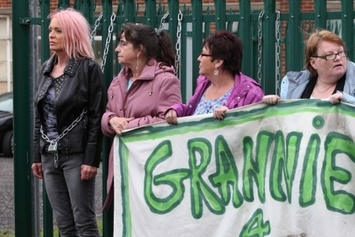 It's launch day for Karen's new community café and she's invited the Director of Education along, as the popular school drama continues. But with Daniel Chalk in charge, will the café be ready in time?

Twins Shona and Rhona are acting up in class, because they're caught in the middle of a bitter custody battle between their mum and gran. As the court makes its decision, the twins' gran takes matters into her own hands, with a stunt that could jeopardise the café launch.

Meanwhile, Rob's estranged wife, Naomi, wants to play happy families and warns Karen off her man in a bid to keep him to herself. And Vicki finally sees Aiden's true colours, and is forced to reveal their infidelity to Jess and Ronan.