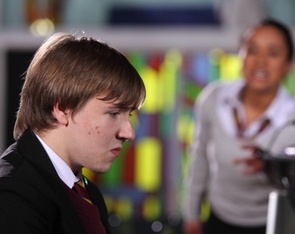 When Amy discovers she has a stalker she feels like a celebrity – but the novelty soon wears off as things get personal and she decides to take her own revenge, as the popular school drama continues.

But when Eleanor reveals who the stalker is, her handling of the situation gives Karen grounds for concern – and an irate parent in her office. Meanwhile, the sixth formers turn the cameras on themselves for their English project and, while Ronan uses his film to show Vicki his real feelings, Finn and Josh get into trouble over their action-packed film-making.

Elsewhere, Rose and Tom struggle with how to tell Sam that there's no cure for her cancer, while Sam's friends try to come to terms with what she's going through.

Janeece decides that Mr Chalk needs a makeover, and Karen realises that Rob's ambitions go higher than being the school's caretaker.