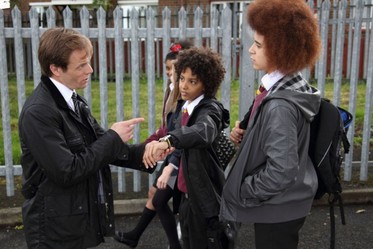 Newly-married Waterloo Road teachers Jez and Sian Diamond plan a dinner party to get to know their colleagues, but the unexpected arrival of Jez's estranged children, Madi and Zack, rocks their world.

Sian's also shocked to learn that Jez has been blanking them for weeks.

Meanwhile, Michael's A-Level recruitment drive brings him to loggerheads with Grantly, who's determined to sabotage the process.

Elsewhere, Matt is touched by Scout's enthusiasm for the guitar and Vicki is inspired to retake her A-level sciences, but when Ronan hosts a surprise house-warming party it only serves to highlight the differences in their relationship.