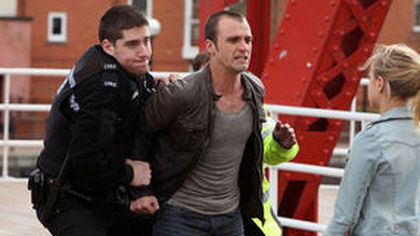 The corridors of Waterloo Road are buzzing with talk of Finn and Ronan's illegal party, an event that is threatening to escalate out of control, as the series set in a Rochdale comprehensive continues.

It is set to take place in an abandoned mill and word quickly spreads among the pupils, leaving the teachers in the dark. The party gets off to a good start but events take a violent turn when some uninvited guests turn up.

Back at Waterloo Road, Cesca makes a life-changing discovery that turns her world upside down and leaves Jonah planning to abandon his education. Later, however, Jonah turns up at the party in a jubilant mood but his irresponsible behaviour leaves Cesca questioning his maturity.

Meanwhile, Bex prepares to run away with Hodge, even though Jess pleads with her to stay. When Karen finds out about Bex's plan, she enlists the help of Chris to track down her daughter. But when an increasingly desperate Hodge takes both Jess and Bex captive, there is a dramatic showdown.