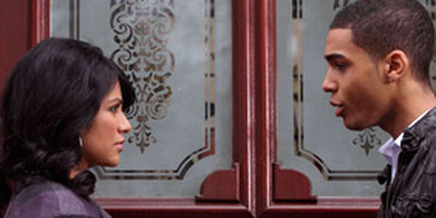 Ruby's political views land her in hot water following the arrival of a new Polish caretaker to Waterloo Road, as the popular school drama continues. Cesca, meanwhile, finds it increasingly hard to resist Jonah's seductive charm; Janeece and Ronan go head to head over a stolen test paper; and Bex tries to return to normality despite the presence of Hodge.

When Ruby witnesses Martin Dowling and Kyle Stack taunting new Polish caretaker Lukas Wisniewski about his right to work in the country, she controversially takes the side of the pupils. Keen to clamp down on this behaviour, Chris discovers that the normally intelligent Martin is emulating his father's right-ring views to gain approval. Lukas is pushed to the brink when Martin and Kyle step up their hate campaign, leaving Ruby condemned by the school and questioning her own views.

Meanwhile, Ronan's scheme to sell exam papers to the other pupils looks set to be a success, especially since Janeece can't prove that he has stolen the original copy from her office. However, Janeece proves to be more resourceful than first thought and hatches a clever plan to thwart him.

Elsewhere, Cesca's relationship with Jonah spirals further out of control as she desperately uses Tom as a decoy to cover up her feelings. And Bex's attempt to forget about her problems with a shopping trip is short-lived when an ever-determined Hodge arrives on the scene, leading to a dramatic showdown.