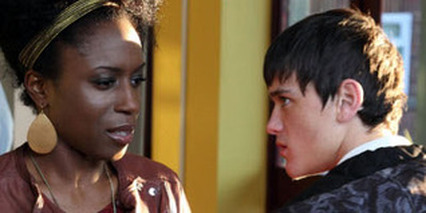 The new term kicks off at Waterloo road with new arrivals for both staff and students, along with the launch of a controversial scheme to separate the boys and girls. Meanwhile, Bex Fisher continues to hide the details of her disappearance as she begins her first day back at school.

In response to the boys' poor exam grades, Karen and Chris introduce a new single sex teaching initiative, much to the disdain of staff and pupils. Especially unimpressed is the formidable new Head of Pastoral Care, Adanna Lawal, who rallies the rest of the staffroom into action against the segregation.

However, the scheme gets off to a bad start as the boys’ lessons quickly descend into chaos, a situation that is made even worse by the arrival of disruptive new student Kyle Stack, who wreaks havoc the moment he steps in the door.

Elsewhere, Bex Fisher’s first day back at Waterloo Road gets off to a rocky start when she is beset with anxiety following an unexpected phone call - leading Jess to suspect her sister is hiding something. Finally arriving at school, Bex becomes embroiled in an allegation of sexual assault involving Kyle, leaving Karen and her staff in a muddled attempt to unravel the truth before Kyle exacts a vicious revenge.