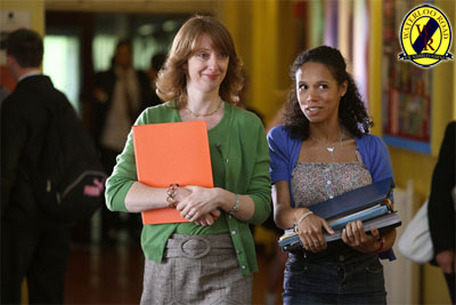 There’s more strife in the Waterloo Road staffroom when Max outlines his latest initiative – splitting the pupils into sets based on their ability. Once again, Max has taken it upon himself to leave Rachel out of the loop, which is bad enough, but she’s also vehemently opposed to the idea, accusing Max of trying to bring independent school ideas to a state-run school – there’s no way it’s going to work. Back in the staffroom, the discontented murmurings turn into a roar when Grantly discovers that Max’s grand plan includes a series of classroom spot checks. Unlike the majority of the ex-John Fosters staff, Jo is quick to see the flaws in Max’s scheme, especially when she sees how the prospect of being put in the “thick” class batters the confidence of lower ability pupils like poor dyslexic Denzil.

As well as Kim’s concerns about his falling grades, Luke also finds that he’s got to deal with the truth about his home background becoming public knowledge. He has managed to keep the fact that he lives in a care home a secret from everyone, including his girlfriend, Siobhan – who is in for a shock when she follows him home. Confused and hurt by his deceit, she confides in Amy, who tells her that she’s “well rid” – Luke is no better than any of the other Waterloo Road “scuzzers”. Thanks to her, Luke’s secret is soon spreading around the school like wildfire. After a day of snide and nasty comments, Luke finally snaps – only to have the full force of Max’s authoritarian rule descend on him like a ton of bricks.

Steph arrives for the first day of her foreign language refresher course but bunks off before lunchtime, sick of feeling professionally inadequate. After being tipped off by Sheila, the course leader, Jo heads round to Steph’s and orders her straight back – has she forgotten that she’s on her last chance? Back at school, Kim’s day is spent organising the Waterloo Road Garden Project. She aims to create a quiet place for the students to retreat to – something she can appreciate herself after getting caught up in Max and Rachel’s increasing animosity! Meanwhile, Tom tries to make inroads with Josh, but he’s simply not interested in playing happy families. After Tom confides in her, Rose puts in a good word for him with Josh, who starts to believe his dad might be worth getting to know after all.

As if the embarrassing truth about his personal life becoming public wasn’t bad enough, Luke is forced to suffer further humiliation when Max puts him on litter collecting duty. In his bright orange bib, he’s an easy – and irresistible – target for Bolton, Paul and Amy, but Siobhan’s accusations are the hardest to take. Despite Kim’s protests, Max decides to increase the pressure, but his decision to order Luke to mop the corridors blows up in his face. Luke storms off, grabs his personal file from Kim’s office, and then breaks into Max’s car. He drives around the playground, throwing the pages from his file out of the window (nearly running a furious Max over in the process) and only stops when he crashes into Kim’s garden.

Max further alienates Kim by calling the police. To make matters worse, Grantly chooses that particular moment to present the results of his Union ballot and an ultimatum – unless Max calls off his initiative, he’ll be facing official strike action. Max is stunned when he sees Jo’s signature amongst those on Grantly’s clipboard, but truly knows he’s lost the battle when Kim adds her signature too. She accuses Max of being on a power-trip and of failing Luke, telling him that unless he gets to grips with Waterloo Road’s many pastoral issues, none of his plans to reform will ever come to anything. Having taken Kim’s words to heart, Max goes to speak to Luke. Although he stands by his actions, he’s decided to give him a chance. He tells Luke not to be ashamed of his background and urges him to work hard so it’s never an issue... just like he had to.

Rachel continues in her attempts to reach out to Lindsey and encourages her to apologise for her recent treatment of Karla. Although a seemingly genuine apology seems to satisfy Karla, it’s far from good enough for the rest of the Waterloo Road pupils, especially Michaela who announces her intention to ambush Lindsey and “kick her head in” on the way home from school. Appalled, Karla runs straight off to warn Rachel and Chris. By the time they arrive, Michaela and Lindsey are scrapping on the floor and it takes Chris to pull them apart. Despite Rachel’s best efforts, it is clear that the tension between the two school factions is showing no signs of cooling off...