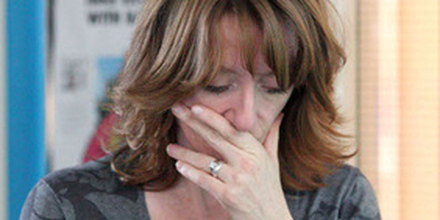 Ruby's day gets off to a bad start when husband John announces he wants a divorce, as the drama set in a Rochdale comprehensive school continues. At work things aren't much better for Ruby as Rachel adds to her workload by putting her in charge of organising the school prom.

When Adam and Rachel announce their engagement, Ruby is devastated, still believing there is something between herself and Adam. Oblivious to her feelings, Adam gives Ruby a sneak peak at the wedding cake he's made for Rachel. Once left alone Ruby lets her emotions get the better of her and trashes the cake.

A distraught and lonely Ruby then turns to her pills for solace, only to discover she's run out. Buckling under the stress, she locks herself in her office. The fallout is huge with Rachel finally uncovering the truth about Ruby's drug addiction.

As a consequence of their behaviour in the art gallery, Finn and Amy are being kept apart. Frustrated by the situation Amy plays up in class and finds herself on the receiving end of Ruby's meltdown. Feeling she's reached the end of the line with Amy's behaviour, Rachel threatens the pupil with a move to a different school.

Meanwhile, Sam and Bolton continue to pretend they don't fancy each other and end up asking different people to the prom. And Steph gets herself in hot water with Rachel when she decides to make a teachers' calendar to raise cash for the prom but "forgets" to mention that the pictures will be in the nude!