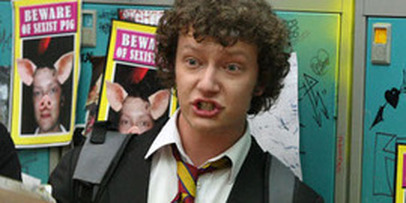 Kim and Chris’ professional and personal relationship comes under strain when they take Year 10 on a trip to an art gallery. Immediately Finn starts to cause trouble and encourages Amy to steal paints from the gift shop.  When he hears Kim suggest to Amy that she shouldn’t let Finn lead her astray he threatens to break up with her. Amy is so desperate to keep Finn on side she agrees to prove her love for him.  While Finn creates a distraction, Amy paints a heart-shaped representation of her and Finn over a valuable painting of lovers.

Tensions between Chris and Kim escalate when Chris’s girlfriend Anna turns up at the gallery and Kim is jealous. Events take a dramatic turn however, when Kim suffers from what she thinks are Braxton Hicks contractions, only to end up on the floor in pain and bleeding. Chris gets her to the hospital where she has to undergo an emergency caesarean section.

Meanwhile, back at school Philip has written a list of pros and cons about Ros in an attempt to get over her. It backfires spectacularly  when Michaela finds it and is insulted that Philip has extolled Ros’ virtues in comparison to the other girls in her year.  She spreads posters around the school labelling Philip a sexist pig, and a huge gender argument soon takes hold.  Rachel tries to focus this into a debate between the sixth form boys and girls as to which sex is better, hoping to make them realise the sexes need to work together.

Steph realises her relationship with OIlie might not be so perfect.  When confronted, Ollie digs himself a hole, saying he’s lucky to be with anyone at his age, leaving Steph feeling like a consolation prize. And Ruby’s crush on Adam develops when he offers to help her move into her new flat.