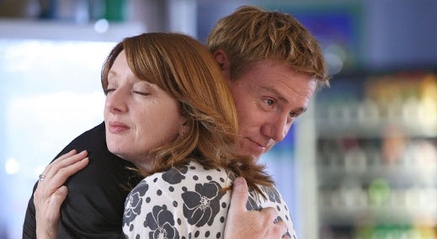 New boy Finn's disruptive behaviour continues at Waterloo Road and he persuades Josh and Amy to join him in smoking a legal high. For Amy, it's a far-from-pleasant experience and Josh has further side-effects when he starts hallucinating in class.

Tom, worried about his son's behaviour, questions Josh who "fesses" up – believing that his dad would be cool about it as they are more like friends than father and son. However, Josh is stunned and humiliated by Tom's angry reaction and, in retaliation, he spikes Tom's lunch with the drug.

Meanwhile, when a frightened Kim has a pregnancy scare, Tom offers to drive her to hospital but, during the journey, the drug's effects take hold and the car crashes, leaving Tom fighting for his life and Kim worried about the future of her baby.

Back at school, Chris is trying to cement a sports partnership with a local posh school. The head, Camilla, is visiting Waterloo Road to consider the proposal, and Chris's attempts to keep the worst side of the school from her fail as she witnesses general rowdiness and the after effects of Josh's behaviour. With plans for the partnership in tatters, Steph steps in to truthfully tell Camilla that Chris only has the schools' best interests at heart, and that they work hard to fix the problems they have. Camilla, however, is only prepared to enter a partnership if Chris agrees to total honesty and openness about Waterloo Road's problems.

Elsewhere, Sam is annoyed with Bolton for ignoring her since their kiss. She seethes about it quietly, thinking he's laughing about her with his friends, until her anger comes out on the basketball court and a fight ensues. Bolton tries to apologise, saying he didn't mean to lead her on, but Sam calls him on it, knowing that he is just embarrassed about her in front of his mates. Adam, meanwhile, discovers Ruby's diazepam but agrees to keep it a secret, and Philip and Ros continue to drift apart as Ros's crush on head of French, Jo, develops.