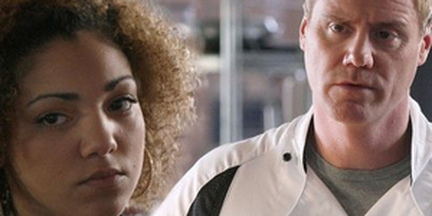 Adam earns Rachel’s disapproval when she hears of him hanging out with the sixth formers at gigs. Adam is unrepentant – he just happened to be drinking where they were. However, when the sixth formers start moaning about how strict and boring Rachel is to Adam, thinking of him more as a mate than staff, he begins to see Rachel’s point. He assures Rachel that in future he'll keep better boundaries with the kids. But he argues that the kids may have got one thing right: Rachel has become so career obsessed that she's forgotten how to relax and have fun - which is something that Adam intends to remedy immediately.

It's work experience day at Waterloo Road and Chris ends up with Finn as a teaching assistant. Finn cockily decides he can easily do Chris’s job, and encourages year 9 to mutiny in class. In retaliation Chris sets Finn up a fall by giving him full authority in the classroom, resulting in Finn being laughed at  by the sixth formers who of course don’t take him seriously.

Angry and humiliated Finn decides to get his own back by vandalising the staffroom, and Chris nearly loses his temper completely. However Kim calms him down and makes him see that he has to be the adult here - his childish tit for tat behaviour has only exasperated the situation. Chris resolves to make a truce with Finn.

Sambuca uses the opportunity of her work placement in a sports shop to try and impress Bolton. She slips a pair of shorts into his bag, not realising they’re security tagged.  Bolton sets the alarm off, and the two of them run for it. Unable to return either to the shop or school the two fugitives spend the day hiding by the canal.  They grow closer and when Sam confesses she doesn’t want to let her mum down Bolton is supportive and sensitive. They share a kiss before going back to face the music, with Sam hoping that this will be the start of something special.

Meanwhile Chris’s day is not improved when he discovers that his dad’s new girlfriend is someone a little too close to home, and his cease fire with Finn comes to an abrupt end when he sees what Finn has left for him in the car park!