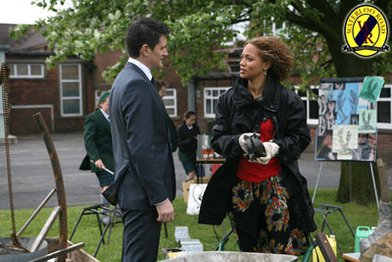 Rachel and Kim are seen in a restaurant in Manchester, the term has not yet started, but they are meeting with the new Deputy Head of Waterloo Road Christopher Mead.  Kim does not like the idea of Christopher when Rachel makes him out to be rather strict, but when she meets him all of this changes and she feels Rachel has made a good decision.  Rachel see's Mr Mead as a friendly "John Fosters face" that will aid in Waterloo Road's pending school merger with the former private school.

As the pupils arrive at school for the new term, it is clear they will not all get along!  The Waterloo Road kids look down on the John Fosters pupils, largely seeing them as snobs, and the John Fosters pupils do not want to mix with the "rough" Waterloo Road lot.  There over 100 new pupils, six new teachers and  of course the new deputy head.  Eddie is nowhere to be seen.

At the home of Lindsay and Emily James, we hear a lot of shouting between parents, before the two school girls run out of the house seemingly disshelved.  They head for their new school, despite already being late.  Both girls are former John Fosters pupils, but it seems they are suffering from problems at home.  When the 2 girls finally arrive at school, Rachel notices Emily looking upset.  She tries to get to the bottom of why Emily is so upset, but Emily refuses to speak.  It appears that their father is using physical violence against their mother.  We see the police turn up at the James' household, and later a body being wheeled out.

Back at Waterloo Road we meet some of the new staff, Jo Lipsett is the new Head of Languages and Helen Hopewell a newly qualified English teacher.  We find out that Tom Clarkson is the new head of the English department.  Another new staff member is Ruby Fry, who appears to be the new Food Technology teacher, and is not happy to be at Waterloo Road, as a former John Fosters teacher.

Rachel holds an assembly at Waterloo Road, in an effort to get the two sets of staff and pupils to mingle together, and get to know each other.  Max Tyler walks into the assembly to applause from the John Fosters pupils.  It is announced that he is the Executive Head of 4 schools in the local area.  Max Tyler seems like a huge disciplinarian and it appears that there will be some tension between himself and Miss Mason.  Following the assembly is also seems that Kim was not happy with the way Max Tyler spoke to the Waterloo Road pupils, and as Max explains himself Kim walks off.  Max later apologies to Kim and they begin to get along.

Philip and Ros McCain get chatting in the art room as they collect props that they can use to complete the school structure the two schools are building outside.  The structure is supposed to demonstrate harmony between John Fosters and Waterloo Road.   As the rest of the lessons around the school start for the day, we discover that Tom Clarkson is now in a relationship with Rose Kelly, taking on the role as father to the Kelly children, and Helen Hopewell is not looking forward to her first lesson teaching at Waterloo Road! During the lesson, Helen loses control of the pupils ultimately resulting in Michaela White and Lindsay James getting into a fight.  Lindsay lashes out and punches Michaela in the face.

Max and Rachel have a meeting in their office, which ends in disaster.  Rachel wants to ensure that the Waterloo Road pupils are treated fairly and given the support they deserve.  Max Tyler seems to only be concerned with the John Fosters pupils and teachers, and ensuring that they bring up standards at Waterloo Road.  Max feels that the improvements that Rachel has made at Waterloo Road are simply not big enough and that military style discipline is needed at the school.  Rachel disagrees.  The meeting is interrupted as Lindsay James and Michaela White are bough to the office for fighting.  When Rachel threatens to call Lindsay's parents, she panics and pleads for Rachel not to call her parents.

We see Steph conducting her first lesson of the day, but when asked for her schemes of work by the new head of French, Steph does not have them ready.  Jo Lipsett is not impressed in what she sees from Steph's teaching standards.  She also tries to encourage Steph to start reading French newspapers, rather than her normal gossip magazines.

As break time begins, news of the fight has begun to spread throughout the school, with many pupils exchanging videos of the fighting on their phones.  Max Tyler forces Lindsay James to apologise to Michaela for punching her, but then turns on Michaela for retaliating.  This annoys Michaela, but she even eventually apologies also.  Rachel comments that she feels Max is using intimidation rather than authority and that he is a bully.  Rachel continues to try and take Lindsay under her wing and support her as a new pupil at the school.

In the staff room, the teachers continue to disagree and a huge argument breaks out between the Waterloo Road and John Fosters staff.  Rachel agrees to talk to the Waterloo Road staff following a complaint by Miss Hopewell, when the police walk into her office and ask to speak to her. It turns out that Lindsay and Emily James father has been murdered, and their mother has been arrested on suspicion of his murder!  Rachel finds the two children and brings them into the Pastoral Care office, where they are informed of his murder.  Emily appears to be far more visibly upset than Lindsay.

Outside, all hell breaks loose as the two sets of pupils clash in a huge fight.  The teachers rush to maintain control, but even this becomes difficult.  When the teachers try to break the fight up, Helen Hopewell gets accidently punched by Michaela White, and all of the kids are sent to the cooler where they are given a dressing down by Max Tyler.  In the meantime, Josh Stevenson is in the computer room, and is looking at a picture of what appears to be Tom Clarkson in his younger days, on the internet.

The pupils and staff gather outside at the end of the day for the unveiling of the new school sculpture.  Inside, Helen Hopewell throws herself down the stairs, seemingly to make it seem as though she was pushed by Michaela White.  She tells Max, and he tells her to stop drawing attention to herself.  Max tells Helen that maybe the job is not for her, and she reminds Max that not so long ago she was his "special girl" and she can "prove that too".

Max announces to Rachel that he will be remaining at Waterloo Road, as he feels the school is out of control and that she cannot control it.  He also tells her that her office will now be his office and closes the door in her face.  Rachel does not look happy, but feels there is nothing she can really do to get rid of Max.

All of the staff go for an after work drink in the pub, can they all now get along?