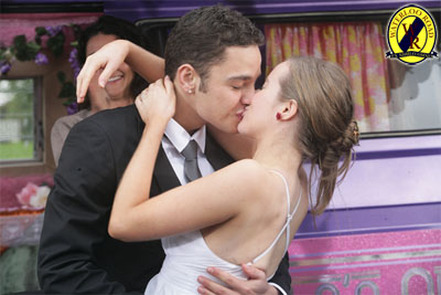 It’s a week since Maxine’s murder and Waterloo Road is still reeling. Rachel has brought in a bereavement councillor, Charlotte Monkton, to help the pupils come to terms with their grief and the teachers cope with their feelings of responsibility and guilt. However, no-one feels more responsible than Rachel; she knows the buck stops with her. She tells Eddie that she’s called a governor’s meeting for that morning and that she intends to hand in her resignation. Bolton also feels guilty. He and Paul are the only ones who know that it was really Earl who had the gun at the start of term. Paul is all for coming clean, but Bolton is terrified of what everyone will think of them for keeping quiet. He’s adamant that they keep quiet, but the guilt is eating away at him.

Janeece and Steph in particular are finding it hard to cope with Maxine’s death. Charlotte has told Janeece to speak to Steph, but she’s doing everything she possibly can to bury her feelings – even Grantly is concerned by the strength of the alcohol fumes that accompany her into the staff room. Elsewhere, Chlo is also decidedly out of sorts and Donte is concerned enough to pay Charlotte a visit. He understands that she’s missing Maxine, but can’t help wishing that there was some way he could make her feel better. Charlotte suggests that Donte find some way of showing Chlo just how much he loves her – her world has been turned upside-down, and the one thing that could help is knowing that Donte will be there for her no matter what. Hit by sudden inspiration, Donte sets about recruiting help to organise a romantic surprise.

As if Rachel and Eddie didn’t have enough to contend with, Rose, Marley and Sam choose that morning to return to Waterloo Road. They’ve all been barricaded inside their house and practically living under siege since Maxine’s death and Marley has decided that enough is enough. Why should the whole family suffer because of Earl’s actions? No one can believe it when the Kellys walk through the main doors and Rachel and Eddie are forced to quickly step in to quell the threats and angry rumblings that greet their arrival. Bolton is more incensed than anyone and he finally snaps when he spots Marley in the corridor during first period.

At the Governors’ meeting, Rachel announces her intentions to resign, to shocked reactions; however, the meeting comes to an abrupt end when Bolton finally catches up with Marley in the corridor outside. As she and Eddie pull Bolton off, Rachel overhears Paul telling him that he’s not helping them “keep it quiet”. With Bolton in the cooler, Rachel gives Paul the grilling of his life until he finally admits that he wrote the note revealing that there was a gun in the school on the first day of term. The gun was Earl’s, not Denzil’s! Rose is heartbroken – how could Earl do something like that to his own brother? The only silver lining is the realisation that Denzil is innocent and that there is now a very good chance of proving it.

Charlotte perseveres with Janeece and Steph. She’s convinced that they need each other and puts all of her effort into getting them into a room together. Steph reveals she feels she let Maxine down by being a bad mother. Janeece tells her Maxine thought she was terrific, and in turn, admits that she feels guilty – if she hadn’t left, Earl might not have fired. Steph convinces Janeece that Maxine wouldn’t have seen it that way, telling her that she was there for her right to the end. At last, both Janeece and Steph feel able to shed their guilt, grieve and start the long process of healing.

Bolton coming clean is Denzil’s only chance. However, Bolton refuses, claiming he doesn’t know anything about a gun. Rachel takes Paul to see a lawyer to sign an affidavit, dragging Bolton along, hoping he’ll have a change of heart. At the solicitor’s, Paul is warned that he could face charges for withholding evidence, but he’s determined to do the right thing. Bolton eventually confesses that he was scared, firstly of what Earl would do to him, and then what other people would say if they found out.  He makes a deal with Rachel – he knows she’s intending to leave, if he signs the affidavit, she has to stay. Deal.

Realising that life is precious, Eddie organises a surprise for Melissa. Far from wanting to put the wedding on hold, he’s brought it forward. In fact, he’s organised a beach wedding in Barbados – and they leave the following week! Meanwhile, Donte and Chlo’s family and friends gather to witness them renew their wedding vows in the school grounds. At the end of the ceremony, Chlo decides to organise a final tribute to Maxine and hundreds of balloons are released in her memory…