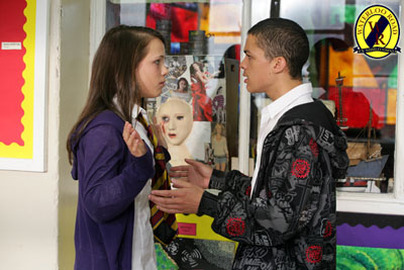 A spot inspection is due at Waterloo Road and Rachel and Eddie reassure a nervous Melissa that it will all be ok. They’ve got plenty to be proud of with their extended services, but do agree that it might be worth keeping an eye on Earl during the day just in case.  The arrival of the inspector, Miss Fellows, puts everyone at ease – she seems in tune with what Waterloo Road is trying to achieve and even Earl seems to be behaving himself. When they finally get a moment on their own, Rachel begs Melissa to tell Eddie that she is still married to Philip’s dad. Melissa reassures her that the divorce is on the way and it’s all under control. Only Phillip knows that this isn’t strictly the case – it isn’t just his dad Melissa is still married to, she’s also still married to her first husband!

Earl is doing his best to convince Maxine that they should have a baby, wanting them to finally have what they never got from their own childhood – a proper family, a home and stability.  This news horrifies Steph, but Maxine’s will becomes stronger and more resolute – no one understands Earl like her.  However, when Jade, a girl from Earl’s old school, demands money from him, Maxine wonders if she knows Earl as well as she thinks she does.  Maxine decides to have a word with Jade but Jade lets slip that she’s expecting money from Earl… for their baby.  Jade explains that Earl’s plan is to sell the baby to a family who want it, for £5,000. Maxine can’t believe what she is hearing – she’s horrified.

Davina sees what looks like Rob bullying Bolton during their boxing training. She raises the issue with Jasmine who immediately jumps to Rob’s defence. The situation exacerbates when Rob, backed up by his doting-girlfriend, confronts Davina in the staffroom and Tom is compelled to step in too. A staffroom brawl ensues, just as Miss Fellows and Eddie walk in. Rachel confronts Rob about the incident and advises him to not to push Bolton too hard. Rob is incensed but Rachel tells him to toughen up – coming under the scrutiny of colleagues is all part of the job. Davina finds that out for herself when Bolton has a go at her in class. Rob has told him about the argument and Bolton wants her to back off. Davina is left astounded by Rob’s lack of professionalism.

An upset Maxine bumps into Earl and the truth comes out. She knows about Jade and his baby and she doesn’t want anymore to do with him – she despises him. How can he talk about a family when he is trying to sell his own baby? Earl is left in turmoil, as a defiant Maxine ditches school to go back to Steph’s, with Janeece.  Steph sees Earl racing out of school and becomes suspicious when she hears that Maxine and Earl have broken up. She gets in her car and races back to the house. Meanwhile, Maxine and Janeece are messing about when Earl appears, carrying a gun. He orders Janeece out and tells Maxine he loves her, but she tells him exactly what she thinks of him.  When she won’t let him speak, he fires the gun.

At school, Miss Fellows is giving Rachel and Eddie a glowing report for their work at Waterloo Road, particularly with the Kelly family.  Rose has just found out she can have her kids back so it’s celebrations all round. Meanwhile, with baby news worth celebrating, Chlo and Donte are at the hospital for their first scan. Whilst Donte couldn’t be happier, Chlo’s emotions are tinged with doubt – whatever happens now, her life is never going to be the same again.

Janeece runs back into the house, Maxine is OK but terrified and furious.  She rants at Earl about how twisted and sick he is. Earl can’t shut her up – she’s twisting a hot wire in his brain.  He raises the gun and fires.  Steph’s car screeches to a halt outside as the gun goes off.  She rushes in to find Maxine in a pool of blood with a distraught Janeece trying to help her.  It’s too late… Maxine dies in Steph’s arms. Later, a confused Earl is picked up by the police. He is struggling to make sense of what he has just done. He wanted to explain and to tell Maxine how much he loved her but she wouldn’t listen – he couldn’t make her understand…