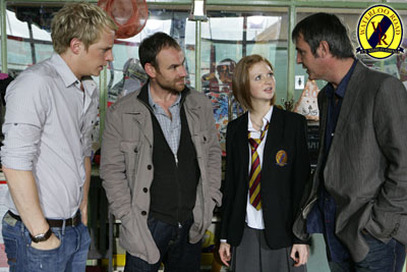 After a blazing row with her dad, a nervous Danielle sneaks out of her house and makes her way to school. Upon arrival, she is welcomed back by Aleesha, Karla who are really excited to see her. Danielle’s not been in school since her father made the decision to educate her from home. Andy Harker believes in home schooling and all the recent bad press, he’s convinced Waterloo Road is not the right school for his daughter. In lessons, Danielle tells Aleesha about the hell she’s going through at home.  Aleesha assumes that Danielle’s dad is hitting her and promises her that she will be safe, but moments later, a furious Andy appears, insisting that his daughter return home with him.

Chlo is horrified to discover that she is pregnant. She confides in Janeece and Maxine that she is thinking of having an abortion without telling Donte. Worried she is making a mistake, Maxine tips off Tom who is devastated but tries to hide his disappointment and give her the options. One thing is definite though, Tom insists that Chlo tell Donte and allow him input into the decision making process. Urged on by Tom, Chlo approaches Donte, who is nervous that she and Tom have somehow found out about their £7,000 debt. He almost spills the beans but then Chlo tells him about the baby. He’s is ecstatic – this is the best thing that has ever happened to them!

Eddie starts the day with a spring in his step.  He’s planning to propose to Melissa that evening, but there’s the school day to get through first and he’s soon hijacked by Aleesha and Karla, announcing that Danielle’s father has been hitting her and has just turned up and physically dragged her out of the school. Despite Rachel’s advice not to go wading in, Eddie storms round to the Harker house to investigate and realises that Danielle has been lying about the abuse and that Andy is actually running a rather impressive home-education programme.  Danielle’s frustrations are because she can’t get her dad to listen to her and resents his sudden involvement in her life. Seeing how upset she is, Eddie promises to help win Andy round to the idea of state education by giving him a tour of Waterloo Road.

During the tour it becomes clear that at the root of Andy’s decision to home-school is a father who wants to spend more time with the daughter he feels guilty for previously neglecting. However, before long the situation deteriorates and Danielle, Aleesha and Karla have stormed up to the roof to start a protest. Eddie and Andy come out to intervene and Danielle’s lie about the abuse is revealed, leading her friends to desert her and leaving her desperate and on the edge of the building. Danielle and Andy have a heart to heart and Danielle explains that she wants him as a father, not a teacher. They agree to start re-building their relationship as father and daughter, with Danielle allowed to continue at Waterloo Road.

Steph discovers valuables have been taken from her wallet, and even more shocking – Earl has been secretly living in Maxine’s bedroom! Maxine and Earl laugh off Steph’s anger but once alone, she asks him about the missing necklace and money. Earl’s anger at being suspected soon makes her regret bringing it up. Later, Earl gives Maxine Steph’s necklace, claiming to have found it.  A loved-up Maxine doesn’t pursue the matter, and Earl suggests the two of them work on what Chlo and Donte have – a baby and a house... they’re just as much in love, aren’t they?  Steph later finds the necklace returned to her purse, leaving her even more worried about the hold Earl has over Maxine.

Melissa rumbles that Eddie is carrying a ring and he is forced to propose right then and there, in front of their colleagues.  Congratulations abound and Rachel struggles to conceal her own feelings and join in the celebrations. Philip, meanwhile, appears to be carrying a secret about Melissa and the engagement that is burning a hole in his conscience. He urges his Mum to tell Eddie she can’t marry him but Melissa refuses. Determined to prove how ‘fine’ she is with the news, Rachel hosts engagement drinks after school for the happy couple. Jasmine, buoyed by a few drinks and encouragement from Davina, decides that she’s going to have to make the first move on Rob and they finally kiss. Meanwhile, Rachel quietly slips away from the party and is surprised to bump into a subdued Philip.  He reluctantly confesses - Melissa and Eddie can’t get engaged. Melissa is already married...