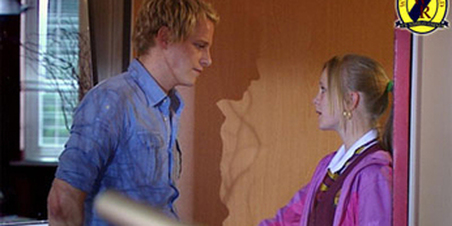 Matt gets more than he bargained for when he becomes a foster carer for the first time. His new charge is none other than Sambuca Kelly, who moves into his house bringing a wave of chaos with her. She’s full of couldn’t care less bravado and seems to go out of her way to embarrass Matt in school. Meanwhile, Rose is devastated that her kids have been taken away by Social Services and vows to do anything it takes to get them back. She begs for a second chance at work and soft hearted Candice relents, knowing Rose has to keep her job to get her kids home again. Rose is working up a sweat in the kitchens when ex-husband Reynold bursts in – Earl has filled him in and he’s outraged that Rose allowed the kids to be taken away. He’s even more furious to learn that his daughter, Sam, is staying with a gay teacher.

Meanwhile, Donte has set himself up as a boxing promoter and has organised an illegal interschool boxing competition, with Bolton representing Waterloo Road. He’s arranged a venue and transport, all the while carefully flying under the radars of the teachers.  Janeece fibs to Rob on Bolton’s behalf to get him out of after school training and free him up for the fight – just as Donte sells the last ticket. It looks like it’s going to be a big night. Bolton is getting eleventh hour nerves, worried that he might be injured, but Donte’s not about to let him chicken out, not after the money he’s spent on the match already.

Matt has words with Sam, telling her how humiliated and disappointed she’s made him feel and that she’s let him down when he hoped they could be friends. Sam’s taken aback and apologises, but it’s not long before Reynold sees Sam in class and realises that Matt is teaching her and storms in to attack him, pinning him up against the wall in terror. Afterwards Rachel and Eddie encourage Matt to press charges but he refuses, thinking it might be detrimental to his fledgling relationship with Sam. However, the ordeal has put doubts in Matt’s mind and he confides in Steph – he’s not sure he’s cut out for this. They both know that the next stop for Sam will be a kid’s home, so he resolves to stick with her.

Reynold heads back to Waterloo Road to talk to Rose. He proposes that Rose move to a bedsit and he has the house and the kids, until she is cleared by the Social to move back in. It’s twisted logic but Rose is desperate, so starts to believe the only way she might be able to get her kids back is with him by her side. She agrees to let him move in. Later, Reynold arrives to pick up Sam, but when he hears she’d rather go with Matt, he and Earl manhandle her into the car and then ransack Matt’s flat. When Matt returns to his devastated flat, something snaps inside him. He’s not taking this bullying anymore – he’s pressing charges, and he’s getting Sam back. On a tip off from Rose he heads off to the boxing match, but when Sam sees him she runs, scared what Reynold will do to him if he finds her.

Rachel has caught wind of the illegal boxing match. She and Rob head to the abandoned warehouse and are aghast to find a sparring match in full swing. They shout for it to stop. Donte is in a world of trouble with the school, and even more when he emerges to see that Earl has taken umbrage at his hot shot boxing promoter attitude. It’s all Donte needs - his debts are spiralling out of control. Meanwhile, Matt catches up with Sam in a back room, but as she’s still explaining why she had to go with Reynold, the man himself comes in. Matt’s terrified, but when Sam announces that she wants to stay with him, not Reynold, he finds the strength to stand up to him. Reynold is shocked to find himself the victim of a surprisingly successful self defence technique Matt picked up off the telly!

Back at the Kelly house, Rose is still fighting her own demons as she tries to resist the bottle of vodka left by Reynold. Too scared to stand on her own feet, she’s resigned to having him back in her life – even though she knows he’s bad for her and the kids. But when Sam pitches up and gives her a talking to, it’s finally Rose’s turn to step up to the plate. As Reynold takes a shower, she quietly calls the police. Rose is going to get her kids back, but she’ll do it her way…