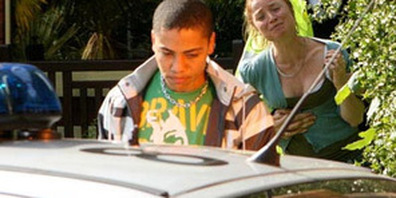 Melissa has organised a drugs awareness day at Waterloo Road and brings in Inspector Ralph Mellor, Chair of the Board of Governors, to take an assembly and conduct drug tests on willing pupils. Rachel is a little concerned about the initiative – she knows how heavy handed Ralph can be and fears the day may degenerate into a witch hunt. However, in the assembly, the day quickly degenerates into uproar when a sniffer dog is introduced. After finding a bag of marijuana on Tom – thankfully planted as an object lesson by Ralph – the doggy detective runs off with Grantly’s hairpiece, giving it a good mauling in the process. With his eye on a quick buck, Donte volunteers Chlo’s services and points Grantly in the direction of the van outside. Unfortunately, Chlo hasn’t got the first clue how to treat a wig and disaster quickly follows.

Back in assembly, Ralph calls upon Marley and Flick to be the drugs test guinea pigs – who better than head boy and girl to set an example to the rest of the school? Both feel forced to agree. However, Ralph has his own agenda – he wants Marley out of the school and away from his daughter and is relying on a positive test result to give him the ammunition he needs to start the ball rolling. When the test results come back, Ralph is horrified to discover that Flick has tested positive and Marley negative. In a panic, he swaps the results and heads to Rachel’s office to triumphantly reveal that Head Boy Marley has tested positive. Rachel, who has invested a lot in the Kellys and particularly Marley, is shocked and disappointed by the news. Ralph is adamant – Marley should be excluded to send a message that Waterloo Road is tough on drugs.

Rachel seeks Marley out and confronts him. He denies taking drugs, but Rachel struggles to believe him in the face of the ‘evidence’. Flick smells a rat when she learns her result came back negative and Marley senses from her reaction that somehow the results were swapped. He falls on his sword to save her from being discovered. Over in the kitchen, Rose is already having a hell of a first day at work and when she hears that her boy has been tested positive for drugs, she crumbles. Her default position has always been to give up when the going gets tough, and Rachel has to remind her that if she wants Social Services to stay off her back and her kids to stay at home, she won’t walk out of another job.

Michaela has found a photo of a young Eddie at a pro-drugs march and it’s soon winging its way around the school, ultimately finding its way into Davina’s first assessment lesson. This, and Sambuca bursting into the room to tell Earl about Marley, causes the class to descend into uproar. The assessor looks on in horror and a panicked Davina’s teaching career hangs in the balance. Eventually Eddie and Rachel arrive and Earl and Sam are carted off to the cooler. Eddie discovers the photo originally came from Philip. He’s gutted – he thought they were getting close. Clearly not. Steph is another surrogate parent having problems. Maxine’s obsession with Earl is showing no signs of abating – she’s even thinking about moving in with him! With so much for Steph to worry about, she hasn’t any time left for Security Dave. However, she soon discovers that Dave is nothing but persistent.

Flick realises that she can’t let Marley take the rap for her drug using. She confronts her dad, demanding he confess to Rachel and Eddie that he’s fiddled the results. But when they get to Rachel’s office, Ralph absolves himself of blame, claiming Marley swapped the results, as some kind of misguided heroic gesture. Rachel assumes that Ralph therefore wants Flick excluded – that’s what he wanted for Marley isn’t it? Surely he’s not advocating one rule for one…? As Ralph starts to backtrack, Flick loses patience and tells Rachel that her dad’s lying – he’s the one who swapped the tests. Rachel is understandably furious. She tells Ralph he has to resign from his position on the school’s board and even worse, apologise to Marley.

When Flick leaves school Marley is there to meet her. She loves him more than ever, but he has some shock news – after living with his mother and all her addictions, he can’t contemplate dating a drugs user. In Rachel’s office, Ralph hands in his letter of resignation to Rachel and ends up on the receiving end of a lecture about interfering with Flick’s happiness. As a result, Ralph leaves her office with a deeper hatred of the Kelly family than ever, and in a fit of revenge he calls Children’s Services to report one or two “home truths”. Over at the Kellys, all hell breaks loose as police and social services arrive to forcibly remove the children and take them into care...