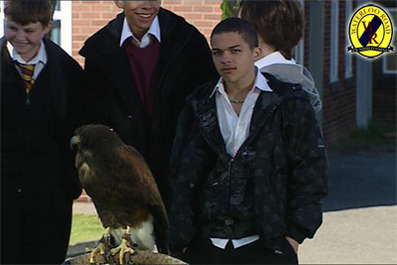 Tom has been finding dead birds on his doorstep and is convinced Earl is responsible – if only he could prove it. His obsession is causing a rift between him and Davina and at school; Rachel is starting to question his professional judgement. However, Eddie is on Tom’s side and has organised a falconry day for some of the more troublesome kids, including Earl. He’s hoping that through education, Earl will learn to respect birds and the ‘gifts’ on Tom’s doorstep will stop. Earl is less than pleased to find himself at the centre of the falconry day and accuses Eddie of jumping to conclusions about his guilt. Eddie assures Earl that all he wants to do is give Earl a chance to prove the sceptics wrong.

Rachel questions Melissa on whether she thinks her blossoming relationship with Eddie is moving too fast. What’s next, moving in together? Although Rachel is joking, her suggestion strikes a chord with Melissa who throws the question to Eddie: him, her and Philip under one roof, would that work? After a moment’s thought, Eddie agrees. A gutted Rachel is left trying to channel her frustrations into work. She’s still determined that Waterloo Road can help the Kelly family turn themselves around and attempts to help Rose give up the drink and get a job, whilst trying to persuade Marley that he can’t be responsible for his family forever. Flick is also convinced that she knows what’s best for Marley and nominates him for Head Boy. Marley is convinced he won’t get it – who’s going to vote for him with his crazy family?

At the falconry session, expert Steve demonstrates the birds’ trust by letting them fly off and return. Earl’s fascinated. He asks to handle the most impressive of the birds, the Harris Hawk but Steve declines, explaining that she is too fiery and doesn’t trust many humans after a difficult upbringing. This seems to strike a chord with Earl who quickly becomes transfixed. As the other pupils take turns to handle the falcon, an unsupervised Earl tries to pet the hawk, convinced of their connection as two rejected, troubled souls. But he goes in too heavy and the bird panics, flapping and pecking at him. Steve tries to calm the bird down but Earl feels humiliated and angry and lashes out, forcing a disappointed Eddie to step in… it looks like Tom might be right about Earl, after all.

Steve and Eddie wrap up the falconry display and discover that the Harris Hawk has been stolen. They follow the Hawk’s tracking device back to Earl’s house but he is nowhere to be seen. The tracking device is left there to taunt them – cut off the hawk. Eddie eventually finds Earl, who’s angry that everyone assumes the worst about him. He explains that’s why he likes the bird so much – animals make up their own minds about who they trust. Earl points out that no one has bothered to ask him about the birds on Tom’s doorstep. If they had, he’d have explained it was their cat. As the kids head home, Maxine is relieved that Earl didn’t do anything wrong and he’s touched to hear she’s been sticking up for him. Eddie tells Marley about Earl’s explanation for the dead birds. Marley covers but later reveals to Flick that they don’t have a cat. Earl’s lying – he did kill them.

Steph is still concerned about Eark and his blossoming relationship with Maxine but she’s distracted by a melancholy Grantly, still crashing at hers since his wife Fleur kicked him out. Steph feels guilty, knowing that she’s partly responsible for the break up, but it doesn’t stop her wanting the miserable lump off her couch! Melissa has the solution – a speed dating night at the school, as part of her raft of new community initiatives. Why doesn’t Steph try and set Grantly up with someone else? Steph manages to trick both Grantly and Fleur into attending, but they both fail miserably at chatting anyone up. Finally, Steph steps in to stop the charade and convinces them to sort things out. After playing matchmaker, Steph has the tables turned on her as she and Security Dave finally admit that they fancy each other and agree to go for a drink.

Flick shows up at the Kelly house and plants a kiss on Marley – she’s always wanted to kiss a Head Boy. Marley can’t believe anyone would vote for him after everything that’s happened. It’s a warm moment - until Earl barges through furious – they’ve had a letter from the council, warning that if there is one more disturbance, they will be evicted. Meanwhile, with Chlo and Donte celebrating their first night in their new flat, Tom and Davina are having a romantic dinner for two. As if on cue, Tom’s car alarm goes off. A bin has been hurled through his windscreen and his CCTV camera has been smashed. Earl is standing there – obviously responsible. Tom tells him he’s finished but Earl responds by spitting on the ground – you first! This war has just got hotter…