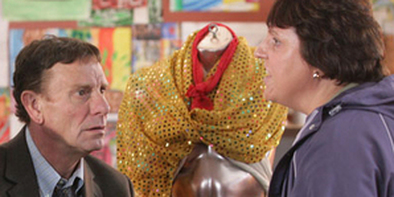 Although she and Tom are shocked by Donte and Chlo’s decision to sell the family home, Davina’s day gets off to a good start when Rachel asks her to cover for a supply teacher who is late arriving. Eventually, Maaka Lacey arrives and causes a stir when he decides to teach the Year Elevens about his own Maori culture, rather than following the syllabus. Davina takes an instant dislike to his somewhat alternative teaching style, feeling that it revolves around little more than his enjoyment of talking about himself. When Maaka lets a homophobic comment go by unchecked, Davina is horrified. A clash ensues during which Davina suggests that homophobia may be endemic in his culture but it isn’t in hers. Maaka accuses her of prejudice and takes the matter to Rachel.

Steph is still being pursued by Security Dave. To put him off, she lies and tells him that she and Grantly are having an affair. The plan backfires when Grantly’s wife, Fleur, pops into the school and Dave feels duty bound to tell her about the affair.  Fleur is devastated, which quickly turns into the fury of a woman scorned. She slaps Steph and bawls a bemused Grantly out in front of his class. Sparks continue to fly when Rob suggests to a furious Jasmine, that the girls’ football team would be better off as cheerleaders. Later, Jasmine makes the mistake of telling the football girls about Rob’s idea. To her horror, they think it sounds great and can’t wait to get their hands on some pom-poms!

Rachel calls Davina and Maaka to her office and a truce is called, both parties agreeing that it was probably just a misunderstanding. After Maaka leaves, Rachel warns Davina to watch herself - Maaka was claiming racism and that isn’t something Davina wants on her record. Davina bites her lip, but soon ends up in hot water again when a confused Karla starts winding Maaka up. After trying to intervene discreetly, Davina is forced to confront him again. Incensed, he heads to Rachel’s office to make a formal complaint. Rachel is shocked and, just when she thinks her day can’t get any more complicated, Melissa drops a bombshell - she and Eddie are seeing each other.

Earl is out to get Tom and starts seriously winding him up in class. After a face off, he walks out of the lesson. Tom goes after him and eventually finds Earl and Maxine having sex in the toilets. To Tom’s consternation, Rachel has a lenient response to this misdemeanour – she’s determined not to give up on the Kelly’s. Earl accuses Tom of hating him. Rachel questions Tom about whether his home situation is affecting his ability to deal with the Kellys at school, which Tom denies. Having been alerted by Tom, Steph goes to see Rose Kelly but receives an indifferent response to her concerns about Maxine and Earl. As Steph tangles with Rose, Tom is next door being told that the value of his own house has plummeted since the arrival of the Kellys.

Maaka lazily sends Earl out of his class when he starts acting up. Free to roam the corridors, Earl confronts Tom in an empty classroom. Goaded by talk of Davina and Izzie, Tom snaps and almost throws a punch at him. Tom is left shaken and makes a full and frank confession to Rachel before resigning from his post as Head of Pastoral care. As Rachel tries to get Tom to change his mind, Davina quickly realises that Maaka is sending disruptive students on false errands. After she and Eddie find Earl wandering the halls. Eddie confronts Maaka, who has only excuses as to why Earl was left unsupervised when Eddie expressly asked him to keep an eye on him. When she hears the news Rachel heads to Maaka’s class to see for herself. She immediately sacks him and asks Davina to take over the lesson

After school, Melissa and Eddie bump into Rachel, who is meeting with her surgeon to discuss the scarring she still carries from the fire. Melissa assumes Rachel is on some sort of date and a highly awkward moment ensues. There’s also an awkward moment in store for Steph when she and Maxine arrive home to find Grantly sitting on the doorstep – Fleur’s kicked him out! Finally, Tom and Davina decide to take Chlo up on her offer for them to buy the house. They aren’t going to be pushed out by the Kellys. However, there’s a nasty shock in store when they return home to find a dead bird on their doorstep. Surely even Earl isn’t capable of this?