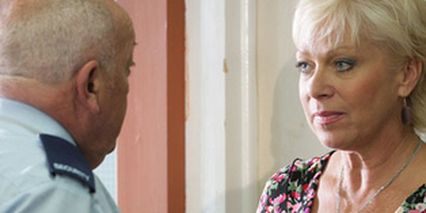 Its Melissa Ryan's first day in her new job as Head of Extended Services and as Rachel's sister she has a lot to prove - Rachel is relying on her to make the initiative work. No one knows about the family connection apart from Rachel, Melissa and Melissa's son, Philip, who's told to keep quiet until they're all more settled. Outside, people are arriving for Melissa's first class, amongst them Bolton's mum, Candice and Donte's dad, Clarence. Donte is hugely embarrassed when his dad turns up at the school in a shirt and tie and immediately takes a shine to Rose. Still, at least Donte can be pleased about the fact that Chlo's Cutz seems to be doing brisk business. Between that and the dodgy DVDs he's selling from the back of the van, he and Chlo are quids in.

Eddie has lingering concerns about Melissa's lack of teaching experience and it looks like he may have a point when her first class proves to be a total disaster. Melissa hasn't prepared anything of enough substance to entertain such demanding adults, especially the troublesome Rose Kelly. Rose is only attending the class in an attempt to butter up her social worker and is soon bored out of her skull. She is also canny enough to spot that Melissa is seriously out of her depth and amuses herself by undermining her at every turn. Rachel is alarmed when potential learners start dropping out, but worse is to come when Candice and Rose end up having a fist fight and have to be separated by Clarence.

Rob brings his boxing equipment into school in the hope that Rachel will agree to him starting up a club. Eddie thinks it's a marvellous idea - he's all for healthy exercise and discipline - and he and Rob manage to persuade Rachel to give the idea a go. Bolton and Paul are first in the queue to join the club and Rob is impressed by their enthusiasm. He also thinks he's spotted real boxing potential in Bolton. Although they're well up for a bit of boxing, Bolton and Paul are less impressed when Rob gives them the job of showing Phillip around. He irritates them so much that they end up tying him up in the toilet. When Matt discovers Philip, he urges him to tell Rachel, but Philip tells him he can't - Rachel is his auntie! The gossip spreads like wildfire and Eddie is incensed when he discovers he's the last to know that Rachel and Melissa are sisters.

After he and Melissa talk, Eddie decides to come to her rescue and gives her some work sheets as a helping hand, but by lunch half the class have given up. Desperate, Melissa appeals to Rose, can the two of them work together? Rose begrudgingly agrees when Melissa says she'll put in a good word for her with Social Services. They head out into the community leafleting, in search of potential learners, promising a free buffet as an incentive. Slowly but surely, adult learners begin trickling back to the school and with the help of Eddie's work sheets, the next class is a resounding success. It looks like Melissa may be able to turn things around and save Rachel's neck after all.

A new security system has been erected in the school foyer and security guard Dave is taking his job very seriously. That is until he develops a crush on Steph. It's not long before Steph finds herself inundated with gifts, much to Matt's amusement. It's clear she's going to have to let Security Dave down gently - but how...? That night in the pub, Grantly reveals to Steph he's having marriage problems with Fleur. Steph cheers him up with karaoke, but then she spots an amorous Dave heading her way and unwittingly adds to Grantly's problems. She decides to fob Dave off by claiming that she's already got a bloke - Grantly! At the end of the night Melissa and Eddie are left in the pub alone and Eddie finds himself increasingly intrigued by her. As the sparks fly between them, Eddie looks like he may finally be ready to move on from Rachel... to her sister?

Over at the Clarkson's house, Tom's still having problems - the Kellys are having a party and lots of kids from school turn up - even a few oldies from Rose's adult education class. The Clarksons try to ignore the din, but eventually Tom loses it and heads round to put a stop to it. Donte is appalled when he discovers his dad Clarence is part of the furore. Philip has also been in on the action and, spiked by Earl, he passes out in a bush. The party comes to an abrupt halt, but not before Maxine and Earl head off upstairs...