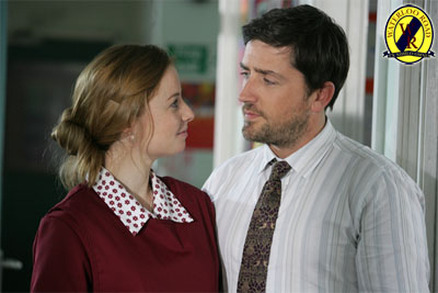 Kim is back in school, eager to keep teaching whilst under investigation from the Home Office. Eddie is worried it’s too soon but Rachel has convinced the governors and is determined that the Rwandan fundraising day they have planned will be a cathartic experience for Kim. Rachel’s positive attitude is extending to Philip. Having bonded the previous evening whilst baking brownies together to sell at the relief day, Rachel is glowing with maternal pride. Apparently eager to make amends with the choir, after being kicked out for stalking Flick, Philip takes a plate of his brownies to them as a peace offering. Meanwhile, Rose and Candice are busy preparing a Rwandan themed menu for the relief day, using their usual supplier of knock-off meat. It’s all past it’s sell-by-date but once they’ve taken off the labels and given it a once-over, no one is any the wiser.

Steph has a surprise up her sleeve and Kim is completely gobsmacked when her ex-boyfriend Andrew Treneman pitches up at the relief day, to ‘lend his support’. It doesn’t take long for Kim to realise that Andrew is really there to discuss what happened in Rwanda. Although initially concerned about how Kim is coping, Andrew can’t help but confront her about her actions, which he deems as irresponsible and selfish – how could she act so impulsively? Kim’s suspicion is aroused by Andrew’s passion on the subject and she questions whether he had anything to do with Grace being taken from her. Andrew confirms the authorities came to him but makes it clear that they already knew everything they needed to by the time they questioned him – what did Kim expect him to do, lie for her? Feeling this deeply as the ultimate betrayal, an emotional Kim snaps and flies at Andrew, taking out the last few months of hurt on her former partner.

Shocked at this behaviour, Rachel suggests to Kim that maybe they were both a bit naïve to think she was ready to be back. Their conversation is interrupted with the news that a number of pupils appear to be suffering from a mystery illness. The situation quickly worsens into a mini-epidemic of suspected food poisoning, with kids coming down left, right and centre. Andrew offers to help. Together with Kim he sets up a triage area in the school and tries to rehydrate all the kids, using medical solutions he brought with him from Rwanda. Meanwhile, the Environmental Health send in their own smiling assassin, Neil Buchanan, to investigate and he decides to start with the canteen. Philip flinches when he hears that Candice and Rose are to be investigated. In turn, Rose and Candice are terrified that their dodgy meat might be to blame and when Neil discovers the discarded labels, he’s confident he’s found the culprit.

The triage area is heaving when Rachel spots a nervous looking Philip – is he ill too? However, Philip is more concerned about what might happen to Rose and Candice. His questions arouse Rachel’s suspicion. She probes and finally Philip confesses to putting laxatives in the brownies he baked in order to ruin the choir’s big day. He wanted to get his own back and get everyone to laugh at them for a change, instead of him. Rachel is gutted. Neil and Eddie arrive at the triage and are about to unmask the canteen when she intervenes and breaks the news about Philip. Rose and Candice are relieved not to be the cause of the outbreak but Eddie makes it clear that their future running the canteen is still in question. A devastated Rose turns to Tom for comfort. He manages to cheer her up and reassures her that Rachel and Eddie won’t let her down.

As the last of the affected kids go home, Rachel and Kim comfort each other following their emotional day. They both agree it is clean slate time for them both. Kim tells Rachel not to blame herself for Philip’s actions, with everything he’s been through it’s hardly surprising. In turn, Rachel advises Kim to work things out with Andrew. In an emotional exchange, Kim finally admits that she may have done something impulsive and unwise in taking Grace but she honestly thought she was acting for the best. Andrew reassures her that he never doubted that for a second – her compassion and spirit are what he loves about her. They apologise to each other, both admitting how much they’ve missed each other and in a moment of tenderness, they kiss.

Flick is getting ready for school when a determined Marley shows up at her door, to return Ralph’s money. Marley and Flick walk off together leaving Ralph seething. Caught up in a rage, he follows them to school and attacks Marley in a violent outburst. Marley is reluctant to call the police – he knows what this will mean for Ralph – but Flick insists; they can’t let him get away with this. As Ralph arrives at the school to try and make things up with Flick, he is shocked to find himself being taken to the police station. Frightened to go home, Marley reassures Flick that she can stay at the Kelly house. They go to collect her things and run straight into a broken Ralph – he’s lost his job and now it looks like he’s losing his daughter too. He begs Flick to stay but she is adamant this time – he’s forced her to choose, and she’s picked Marley…