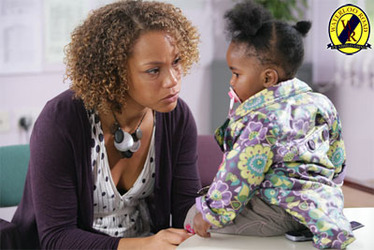 Relieved that the Home Office seem to have finally desisted their investigation, Kim throws all her energies into mediating between the increasingly embittered Donte and Chlo as they struggle to decide a future for their baby. Kim brings a lawyer in to talk to Donte about his rights as a father, whilst Chlo remains adamant that the baby should be adopted. Tom persuades Chlo to attend the conference with Donte but it becomes clear as the meeting deteriorates that Donte is determined to raise his baby; if that means divorcing her to secure custody, then he will. When Tom offers to help raise the child and house Donte, an already devastated Chlo is left feeling more alone and angry than ever. Kim later finds her hiding in the toilets but their heartfelt talk is cut short when Chlo doubles up in pain. Kim calls an ambulance and tries to stay calm – the baby isn’t due for another six weeks.

Kim’s earlier celebrations prove premature as a Home Office official comes into the school to tell a shocked Eddie and Rachel that Kim has appropriated a baby from Rwanda against the biological father’s wishes. They are here to take the baby back. Meanwhile a guilty Donte rushes to Chlo’s side, terrified that their earlier argument induced her premature labour. When the midwife arrives, its bad news – Chlo’s baby is breech. With a delayed ambulance, the only option is to deliver the baby there and then – both Chlo and the baby are fighting for their lives now. Shocked into thinking clearly for the first time in weeks, Donte realises that he cannot lose Chlo, no matter what. As the labour progresses, they all work together to help Chlo and eventually a baby girl arrives. Thankfully, both she and her mother are in perfect health.

Kim’s elation is cut unceremoniously short as Rachel informs her that the Home Office have arrived for Grace. Her whole world comes crashing down as she hears the officials paint her as little more than a criminal who paid another woman for her baby. Grace will be made a ward of the court and then be deported back to her waiting family in Rwanda. A desperate Kim leaves the room to ‘get some air’ but she has one thought on her mind: she must get Grace and run away, anything to avoid losing her baby. Steph tries to help buy her some more time but it isn’t long before the Home Office have Kim and Grace cornered. Rachel finally persuades her that these final moments she has with Grace would be best spent saying goodbye.

A beaming grandfather, Tom follows Chlo and Donte to the hospital with a delighted Rose in tow. Donte tells the recovering Chlo that she is everything to him and that if he has to give their child away to keep her, then he will. Chlo is heartbroken for Donte but their moment is interrupted when the midwife offers to bring their daughter in. Much to Donte’s surprise Chlo does want to see their child. Back at Waterloo Road, a heartbroken Kim hands her daughter over to the officials with a final kiss on the forehead. When a frustrated Rachel begins to question her motives for committing such a crime, a distraught Kim snaps – Rachel knows nothing about Africa or the hell Grace’s mother has been through. All she is guilty of is trying to give Grace a better life.

As Kim is led away to the police station, gossip and rumours spread round Waterloo Road. Rachel reflects on the day’s events and concludes that Kim’s motives were, at least, the right ones – she can’t stand by and do nothing. She decides to make sure Kim has a lawyer with her. On top of all this, Rachel and Eddie have more to deal with when Philip manages to get himself kicked out of the choir. Flick, desperate to conceal her own inability to write song lyrics for the school song, distracts Matt by blaming Philip’s stalking her for her lack of creative inspiration. To the mocking chants of the choir, Philip leaves the room, intent on revenge. Elsewhere, Janeece inspires Flick about the easiest way to create a new school song – cheat.

Back at the hospital, Chlo stares at her baby with something approaching awe; her mind rethinking everything she felt before this moment. She explains to Donte that ever since she got pregnant she’d been worried about what her mum would’ve thought and how disappointed she would have been; but now Chlo realises that, above anything else, her Mum would want her to be happy and that’s something Chlo can only be if she, Donte and their daughter are together. They decide to call their daughter, Izzy. Swept up in this moment of bliss, Tom and Rose share a tender, happy kiss of their own. Meanwhile, a concerned Steph calls round at Kim’s house to see if there is anything she can do, but Kim is in pieces and can’t even answer the door. Kim looks round the silent, empty flat which still bears the remnants of her daughter’s presence and breaks down...