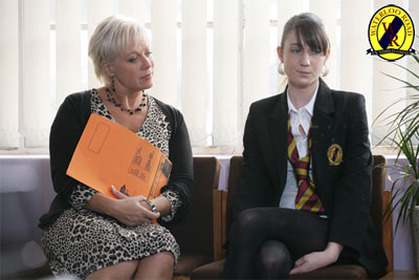 After two weeks of hiding out in the countryside with Grace, Steph returns to Waterloo Road to be met with suspicion from Rachel who doesn’t believe her cover story of a professed case of shingles. In addition, the supply teacher who had been covering Steph’s French classes has worked wonders, leaving Rachel to question her role at Waterloo Road. Grantly is back too and heavily milking his invalid status to full advantage, leaving a guilt-ridden Jasmine offering to take on his workload and to continue covering his position as Head of Department. In the playground, Danielle and Aleesha’s friendship is being put to the test by Aleesha’s new obsession with fellow pupil, Tasha Lefton. Recently discovered, Tasha has embarked on a part-time modelling career, reaching the heady heights of the Rochdale Observer. Tasha is playing it cool but Aleesha can’t get over how exciting this all is.

Steph’s first lesson quickly descends into mayhem when she sees Tasha copying Danielle’s work – what Steph doesn’t realise, and what Tasha is desperate to keep concealed, is that her vision is currently so bad that she can no longer see the board. Desperate to draw attention away from her real reasons for looking over Danielle’s shoulder, Tasha acts up, whipping her classmates up into a mutiny, all aimed at Steph. A shocked Steph struggles to regain control and sends Tasha to the cooler. When Steph goes to Rachel with a complaint against Tasha, she receives little sympathy from Rachel who assumes it was probably Steph’s fault that she lost control of the class. She warns Steph that her future at Waterloo Road could be in jeopardy if she cannot improve her job performance.

And Steph is not the only person Tasha is causing problems for – Danielle and Aleesha are still at loggerheads. Danielle feels that Aleesha is becoming another one of Tasha’s sycophantic ‘fans’ and Aleesha is convinced Danielle is picking on her – a situation exacerbated when Tasha’s blurry vision causes her to trip down the stairs, a stumble which she blames on Danielle pushing her. Finally, Steph twigs what is going on and confronts Tasha about her appalling eyesight. She assumes the young girl is simply worried about wearing glasses but becomes suspicious when Tasha reluctantly agrees to make an eye appointment but refuses to let the school contact her mother. In the canteen, Tasha continues to claim she was pushed her down the stairs, further alienating Danielle, but over lunch her obsession with dieting and size becomes more apparent. When Steph tries to persuade Rachel there are bigger issues at work, Rachel assumes Steph is simply picking on Tasha.

Grantly’s lies are rumbled when Fleur drops into school to give him the tablets he needs to treat his gallstones. Jasmine balks – what, he never had a heart attack? But revenge is sweet as she exposes Grantly’s deception in front of the entire staffroom and hands back his massive workload. Meanwhile, Donte is still struggling to come to terms with Chlo’s decision to put their baby up for adoption and a concerned Kim tries to mediate. She gently urges Chlo to involve Donte in the decision and to ask Tom or even the social services for some advice, but Chlo seems determined to proceed no matter what. Tom assures Donte he will talk Chlo round but when he speaks to Chlo, he leaves reminded of how lost and confused she is at the thought of imminent motherhood. Upset by the distance between them, Chlo tries again to talk Donte round – she believes they’ll be great parents one day, just not now but Donte can’t accept this vision of the future. He packs his bag and leaves for his Dad’s, leaving the painfully raw divide between them wider than ever.

Steph quietly investigates Tasha’s student file to discover she is type one diabetic and suddenly the symptoms: weakness, irritability and bad vision all make sense – Tasha is experiencing a hypo… she’s proved right when the weakened Tasha collapses in the corridor. Steph calls the school nurse and they administer insulin as a shocked Danielle and Aleesha look on. When Tasha’s mother comes into the school, Steph explains that Tasha has been deliberately not taking her insulin in an effort to stay thin. Tasha is adamant that she needs to be a size six to continue her modelling career but eventually breaks down and admits that it isn’t worth losing her sight for. Steph has done her research and promises both mother and daughter that the school will do everything they can to help Tasha recover. An impressed Rachel is forced to apologise to Steph – although she may not be the world’s best teacher, her instincts where the pupils are concerned are second to none. Shocked by the day’s events, Aleesha and Danielle decide to make up over a big packet of fish and chips.

On marking Rose’s mock A Level exam, Tom is surprised and delighted when he realises she has passed. He rushes to give her the good news that she’s stormed it, but Rose’s joy quickly deflates when Tom insensitively points out how far she has come from being just another sink estate, alkie drop-out mum. Tom turns up at Rose’s house that evening determined to make amends. Armed with a bunch of flowers, he starts to reel off a long list of all the mistakes he has made in his life: his affair with Izzy, Lorna aborting his baby… the list goes on and on. He convinces Rose that only difference between them is that he’s managed to keep his problems behind closed doors, but that he honestly doesn’t think he is better than her. He leaves happy and Rose is touched – the growing warmth and tenderness between them more palpable than ever…