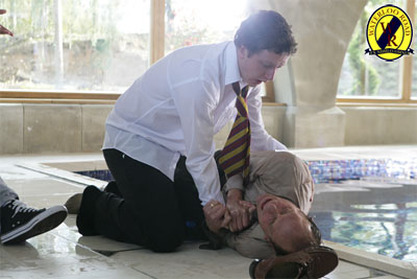 Waterloo Road’s latest supply teacher Jem Allen cruises into the car park in her flashy car. Her wealthy and glamorous lifestyle are making a good impression on all the students and staff, bar one - Grantly. Jem delights in being the centre of attention and her latest good deed is to arrange for an old friend from the BBC to come and film a news item about Matt’s choir. In the staffroom, Jem’s tales of her lavish lifestyle, her wealthy boyfriend’s massive house and her inspirational attitude to teaching continue to impress the staff and wind up Grantly.  When Eddie hears him slagging Jem off by implying she could be exaggerating, he decides that Grantly can take Jem on his theatre trip that afternoon as a bonding experience.  Jasmine adds to Grantly’s woes when, egged on by Jem, she tells him she has been keeping a dossier on his underpar performance as Head of English. She plans to give Rachel a copy today. Grantly balks – his day is not going well.

As Rose, Flick, Marley and Chlo wait anxiously for their A/AS Level English exams to start, their attention is momentarily distracted by the arrival of Janeece, sporting an improvised hijab. Tired of being the subject of lewd remarks, this is Janeece’s latest confused attempt to appear modest. Unsurprisingly, Janeece’s makeshift hijab is mocked royally by her fellow pupils, but Muslim student Waffa is angry at her lack of respect and understanding for this symbol of her faith. After the exam, Flick finds a set of used underwear has been left in her bag. She guesses correctly that it’s another, increasingly creepy present from Philip. In a bid to get away from him and to get closer to Marley, she takes Chlo to the café where she knows Marley is pulling all the shifts he can. Chlo wonders why Marley is jeopardising his exams by working so many hours but Flick knows he’s doing it to try and pay her dad back.

A nervous Matt catches Jem as she dashes to the coach leaving for the school trip – the BBC TV crew still haven’t arrived. Jem is outraged and phones her friend to find out what’s going on. She has to break it to a crushed Matt that the crew won’t be coming after all. Jem is all apologies and promises to make it up with a visit from her good friend, Charlotte Church. Matt is mollified, for now. On the coach, the antagonism between Grantly and Jem heats up and Grantly decides to call Jem’s bluff by suggesting a detour to her massive house – fully expecting her to say no. To his surprise, Jem agrees and when they pull up in front of an impressive country pad and Jem lets them in, Grantly has to admit defeat. Jem takes the kids on a tour of the house – impressing them at every turn with the swimming pool, cinema room and amazing views. Only fact-obsessed Karla is suspicious by some of the inconsistencies in Jem’s answers about her life. It isn’t long before Bolton, Paul and Philip manage to take advantage by lifting a few bottles of champagne out of the fridge on the quiet.

Back at school, a furious Matt phones the BBC to complain about the no-show camera crew only to learn that they have never heard of a Jem Allen. At the same time, Eddie and Rachel learn that the coach never made it to the theatre.  Unable to get hold of the school trip, Eddie tries the number on Jem’s CV and speaks to her mother who lets slip that Jem lives at home with her... Jem’s web of lies is beginning to unravel, especially when Grantly finds a set of house-sitting instructions back at the house – it isn’t Jem’s house at all! Before he can enjoy a good gloat, Paul runs in panicked – they were messing around in the pool room, when Bolton slipped in and hit his head. Grantly dives into the pool to rescue Bolton and when an angry Jem turns on the kids, he erupts and exposes her web of deceit. As the scene dissolves into chaos, Grantly clutches his chest in horror. As Jem falls into complete panic, Philip and Paul stay calm and call an ambulance whilst comforting Grantly, who is gripped with pain. As the ambulance arrives, Jem tries to stick to her cover story and blame Grantly for the day’s events but the kids overhear and make sure the truth is heard – they won’t let her get away with this.

Back at the school, Jasmine asks Rachel whether she will be taking the matter of her dossier on Grantly any further. Rachel cuts her short, telling her about Grantly’s heart attack which embarrasses Jasmine into silence. Rachel rushes to visit Grantly at the hospital, leaving Eddie to deal with Jem, who can no longer conceal that she is a compulsive liar.  Furious that her actions put the pupils at risk, Eddie fires Jem and promises to contact the LEA about her dangerous conduct. Meanwhile, as Philip milks his hero status, he is accosted by Flick who throws the dodgy underwear back at him – what kind of freak would do that? Philip’s humiliation is heightened when Rachel sees and recognises the underwear as hers!

Chlo’s success in the exam hall gives her a new surge of confidence but Donte’s reaction to her thoughts on which university to go to, make her realise how much being a new mum will limit her future and her experience of being a student. She opens up to Kim about her concerns, who worries about what Chlo might be considering.  That night, an emotionally torn Chlo forces herself to admit to Donte that she isn’t ready to be a mum – she wants to give the baby up for adoption. A stunned Donte is unable to process this information. He walks out speechless, leaving a devastated Chlo alone…