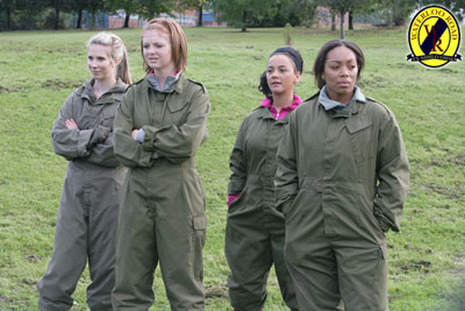 Determined to reunite the football team, Tom invites his friend, Army Captain Andy Rigby and some of his colleagues to put the girls through their paces and help them learn what teamwork is all about. Tom is determined to motivate the whole team, particularly Michaela, for whom he sees the day as a real opportunity for her to prove herself as more than just a slacker and a bully. Unfortunately for Tom, the day gets off to a bad start when someone decides to let off a stinkbomb inside the army lorry. To make matters worse, ever since Bolton dumped Janeece for Michaela, the two girls have been at daggers drawn. The non-stop needle quickly turns to violence when Michaela decides to turn a hose on Janeece. It takes five soldiers to pull them apart.

Davina finally qualifies as a teacher and she’s delighted when Rachel offers her a permanent teaching contract at Waterloo Road. This is music to Grantly’s ears – another NQT in the English department he can cajole into taking his classes, especially now that Jasmine has wised up to him. Rightly so, Davina is in the mood to celebrate, but she’s disappointed by Tom’s lukewarm response. She receives a further shock when she goes to book a holiday and discovers that £2000 is missing from their joint account. Tom guiltily confesses that he leant the money to Rose. Davina is horrified, especially given Rose’s ‘problem’ – how many bottles of vodka does £2000 buy? Tom has no choice but to break the promise he made to Rose and tell Davina that she’s off the booze and attending AA meetings.

After the events of his party, Phillip is well and truly smitten and presents Flick with a homemade card. Flick is clearly embarrassed and thanks him for cooling things down between them at the party and, although she respects him for that, there will never be anything between them. Phillip slinks away, deflated, but convinced that all Flick needs is a spot of convincing. Meanwhile, an immigration official is searching Kim’s home for any trace of a child, but Grace is hiding in the country with Steph, and Kim’s convinced she has put the authorities off the scent.  Unbeknownst to her, the official has seen through her lies and authorises a further investigation of her case, adamant that Kim is hiding something.

Rachel drags Michaela and Janeece off to the cooler. She threatens to exclude both girls from the rest of the day’s activities and is stunned when Michaela rather uncharacteristically pleads for another chance before promptly apologising to Janeece. Back outside, Tom and Andy continue to observe the girls – despite their best efforts, they just aren’t bonding together as a team. Andy suggests that what the girls need to bring them together is a common enemy to defeat – at Waterloo Road, that means the teachers, so how about a staff vs. pupils’ assault course race? Unbeknown to Tom, Davina is confronting Rose about the money. She knows that Rose has been attending AA meetings, but even so, she has to make sure that Tom isn’t being taken for a mug.

On the assault course, the teachers only just win when Michaela falls behind on the last leg against Eddie, and Andy and his team of soldiers go round the course to show them all how it’s done. However, they get a nasty surprise when they realise that someone has planted chilli powder under the nets.  Michaela cracks under a grilling from Andy and runs off. Everyone’s assuming her motive is simply to cause trouble, but Tom discovers that her brother returned from Iraq severely traumatised and had to leave the army – she just wanted them to look stupid. Andy’s not angry, he tells her how impressed he is with her brains and iron will – he thinks she’d make a good soldier.

Tom finds himself on the receiving end of a slap from Rose, furious that he’s broken his promise to keep her AA meetings a secret. Davina witnesses the encounter from her classroom window and is left feeling humiliated – Rose definitely looks like a woman scorned. Tom can’t believe that Davina thinks something might be going on behind her back and reassures her that that isn’t the case. He promises her that he’ll be spending less time with Rose in the future but Davina’s still hurt and angry, convinced that she will never be Tom’s top priority. Later, Tom returns home laden with champagne and flowers, determined to make it up to Davina, but finds that there’s a letter waiting for him. An incredulous Tom crumbles to the ground as at the station, Davina steps onto a train…