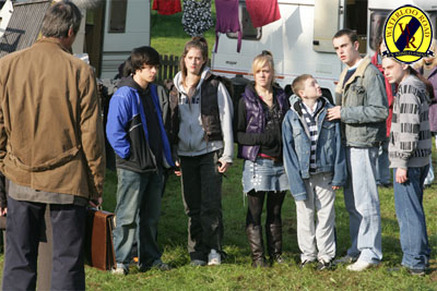 With Rachel away at a conference, Waterloo Road has a new leader and Eddie is raring to go. However, it’s immediately clear that he’s got his work cut out for him when a group of travellers pitch up on school land, and with them, eight kids who need to be enrolled at the school. Inevitably, it’s not long before tensions mount between the traveller’s kids and the pupils. Paul is enraged when one of the kids, Colin, jumps the breakfast club queue and nicks the last of the sausages, but worse is to come when a leak causes the ceiling in Grantly’s classroom to crash in, drenching Paul in the process. Grantly jumps in with both feet and accuses the travellers of nicking the lead off the roof, until Kim steps in and reminds him that the whole school is falling apart – did the travellers cause the dry rot too? Unfortunately, as far as Paul is concerned, the damage is done.

Janeece is back after her boob job and she’s flashing her assets with pride. Bolton is suddenly the envy of every lad in the school as jaws drop and eyeballs pop in every corridor. He’s chuffed to bits with Janeece’s new curves and is wallowing in the attention she’s getting. Kim however is far from impressed and orders Janeece to put her jumper on and stop drawing attention to herself – only problem is, she’s now ‘outgrown’ her old uniform. Kim is concerned that Janeece’s look is going to spark a ‘low cut, high rise’ trend and decides to clamp down on uniform customisation – as of now, the school ‘uniform’ will be just that, and everyone will look the same. It’s the last thing the likes of Aleesha and Danielle want so if Miss Campbell wants everyone looking the same – fine – they’ll all look like Janeece, falsies and everything!

Eddie notices that one of the travellers kids – Kyle – is missing and orders him into school to join the others. Kyle has been enrolled in more schools than most of the other kids have had hot dinners and so approaches every lesson with the same cynical attitude. In English, Jasmine manages to bring the best out of Kyle. He also makes a bit of a hit with Sam – having travelled around a lot herself, she can see exactly where Kyle is coming from and urges him to give Waterloo Road a chance. Just when it looks like Kyle and the other kids might be settling in, Paul accuses Colin of stealing his mobile phone. A commotion kicks off in the playground and Eddie has to intervene – they need something to unite the two groups and Eddie thinks he’s got the answer – a footie match.

Flick’s still upset after her break up with Marley, and he’s feeling even worse for accepting Ralph’s bribe. When Chlo lays into him, the guilt becomes too much for him to bear and desolate, he goes to the canteen and confesses all to Rose. She immediately resolves to get the money to pay Ralph back so that her son can be reunited with the girl he loves. However, her hopes of raising the cash are soon dashed. Feeling like a complete failure, she’s unable to resist the lure of the vodka bottle. Back in the canteen, Candice realises that Rose is absolutely sozzled and immediately calls for Tom. He drags her straight off to the changing rooms and throws her straight into a cold shower. Rose is at her lowest ebb and she knows it. She eventually agrees to Tom and Candice’s demands that she got to AA but makes them both promise that it will remain a secret between the three of them.

The football match looks like it might be called off before it begins when Bolton points out that the travellers are one man short. Sam persuades Denzil to step in and the match gets underway. Phillip is in goal for the pupils and it soon becomes clear that he’s no match for the skills of the travellers. With the score line going against them, the pupils resort to dirty tactics and after Denzil is left writhing on the floor in agony, the simmering tensions bubble over into violence. Before Eddie knows it, he’s got a riot on his hands. Teachers flood the pitch from all corners and drag the kids off. In the cooler, the traveller kids are annoyed that the victimisation is continuing – they’re locked up, but where are the Waterloo Road pupils? Eddie tries to explain that he’s just keeping everyone separate until things calm down but Kyle isn’t buying it – Eddie’s just the same as all the others.

Eddie knows he’s let Kyle down and when Denzil tells him that Paul started it all, Eddie knows he has to make amends. After getting the truth, Eddie apologises to Kyle. He’s surprised and pleased to learn that Kyle has enjoyed his day – in fact his opinion of school has changed and he’s intending on coming back. Eddie has a word with Kyle’s dad and persuades him to consider putting down roots to enable Kyle to get his GCSEs, but the decision is taken out of their hands when the police turn up to move the travellers on. Eddie tries to intervene but is told that the police are acting on the request of the council, who were earlier tipped off... by Eddie! As Sam waves a heartbroken and tearful goodbye to Kyle, Kim has a few words of comfort to Eddie – you can’t win ‘em all...