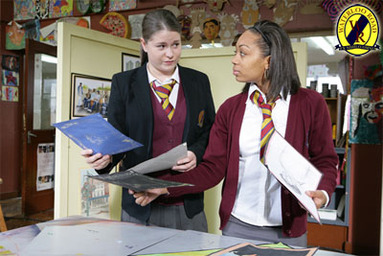 Kim thinks she’s found an artistic prodigy in Karla, but her excitement quickly turns to dismay when David Medar, Grace’s uncle turns up in the art room. David tells Kim that he is there on behalf of Grace’s family in Rwanda to ask for a ‘gift’ - £1000 to build Grace’s grandmother a retirement home in the village. He makes it clear that if he doesn’t receive the payment by the end of the day, the family will reconsider Grace’s position with Kim. Meanwhile, when she sees Karla’s art work, Michaela’s business brain kicks in to overdrive and she approaches Karla about putting on an exhibition to make a few quid. Karla doesn’t want her artwork sold, but she agrees to do a few portraits, with Michaela as her agent.

Absorbed by David’s threats, Kim absent-mindedly gives Michaela her permission to hold the exhibition, despite being warned about her by Rachel. Kim is desperate to find the £1000, but when Rachel is unable to give her an advance on her salary, she is forced to approach Steph. Although she’s willing to stump up the cash, Steph is left concerned. Back in the art room, Michaela has installed Karla in the toilets, drawing portraits at £5 a pop. With Karla occupied, Michaela is free to start selling her pictures, despite having promised not to. With a steady flow of demanding customers, it’s not long before Karla is feeling the strain, and when she discovers that Michaela has been selling her precious pictures, it’s the last straw. As a fight erupts between Michaela and a dissatisfied customer, Karla flips and flees the school.

Annoyed that Chlo’s studying is taking her away from him, and that there’s now a good chance she’ll go to Uni, Donte takes his frustrations out on the Chlo’s Cutz van and trashes it. Chlo is horrified when she sees the end result of his immature reaction – how on earth is he going to be able to raise a child when he’s still a kid himself. After talking it all through with Tom, Donte realises what a selfish idiot he’s being and resolves to make amends. He starts by volunteering in the crèche, and then tells Chlo that he’ll do everything he can to support her, including selling the van to help pay her tuition fees. Chlo is touched by this gesture and decides to give him another chance.

After splitting up the fight in the art room, Eddie goes to confront Kim. She’s appalled when she hears that Karla’s gone missing and even worse, not answering her mobile phone. Realising that she’s ultimately the one to blame, Kim heads out in search of her. Karla finally answers her phone, by this time; she’s cowering on a busy traffic island and panicking like mad. Kim manages to calm her down for long enough to describe the landmarks around her. Later, with Karla safely reinstalled back at Waterloo Road, Kim turns her attention to David. If the incident with Karla has taught her anything, it’s that bullies cannot be allowed to exploit others. Fuelled up, she tells him that he won’t be getting a penny out of her. David urges Kim to reconsider – what would her friends say if they found out the truth? Kim refuses to be blackmailed and walks away.

Still determined to pursue a career in a glamour modelling, Janeece is undergoing surgery to enlarge her breasts, paid for by her mother as an eighteenth birthday present. Mrs Bryant thinks the surgery is a great idea, as does Janeece until the surgeon starts talking about possible risks, but it’s too late for her to back out now. As his girlfriend goes under the knife, Bolton is basking in the admiration and jealousy of his mates. However, when he visits Janeece at the hospital, Bolton realises that surgery isn’t very glamorous after all, and a bruised Janeece looks less than enamoured with what she has done.

Philip’s stroppy attitude is getting worse, and Eddie and Rachel realise that Phillip is testing them – he needs proof that they aren’t going to leave him too. They decide to go for a family night out to the bowling but as Rachel and Eddie are gearing up to take each other on, Philip texts them – he’s had a better offer. Away from the school and all their usual responsibilities, an evening of fun and some serious flirting ensues. Their competitive natures make for a lively game and finally, fuelled by banter and bowling success, Eddie and Rachel kiss… strike!