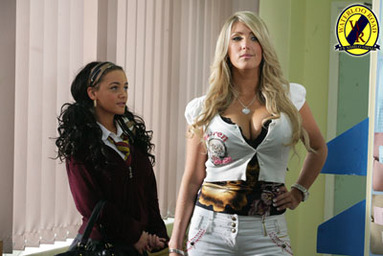 It’s the start of the new term and Waterloo Road is full of excitement at the return of former Head of Pastoral Care, Kim Campbell. She’s back from Rwanda with a baby in tow, but no Andrew Treneman. The staffroom rumour mill immediately goes into overdrive. Who’s the father? Kim is evasive – all anyone needs to know is that Grace is hers. After dropping Grace off at the crèche, Kim bumps into a pregnant Chlo and struggles to hide her surprise when she discovers that she’s given up on her A’ Levels completely in favour of being a mum and a hairdresser. Meanwhile, things are awkward between Eddie and Rachel. They’ve not seen each other since Melissa’s departure and Eddie is still feeling pretty humiliated, whilst Rachel has become a makeshift mum to Phillip. Although it quickly becomes obvious that Phillip is desperate for his attention, Eddie makes it clear that he wants to keep his distance.

Despite the negative vibes she’s receiving from Eddie who seems keen to make her feel as uncomfortable as possible, Kim can’t wait to get stuck in to work. Rachel has organised a careers day and has invited along a number of successful Waterloo Road alumni, including a doctor, a top charity worker, a flash businessman and a policeman called Pete who is hugely excited at the prospect of getting reacquainted with the object of his schoolboy fantasies: Steph. However, the event is thrown in to chaos by the arrival of Jordan-esque glamour model Sarah-Leanne. Kim’s worried at how impressed the kids are, particularly Janeece who is soon following Sarah-Leanne around like an adoring puppy. Kim is determined to make it clear that plastic surgery and no qualifications do not always equal a successful future, but she’s met her match in Sarah-Leanne. The pupils look on in amazement as a full-on battle of wills ensues.

Jasmine is dealing with Rob’s departure by throwing herself into her new role as Deputy Head of English, but her quest to inject a little more efficiency into the department is met with disdain by Grantly. Elsewhere, Marley is trying to keep away from Flick as agreed with Ralph, but this backfires slightly when Denzil lets slip to her that the Kelly family have a new home thanks to Marley. Flick is confused – where did Marley get the money, and does this mean that they can get back together now that everything’s sorted? She confronts Marley who realises that he’s going to have to try a lot harder to convince her that their relationship is definitely over. Desperately, he tells her that she means nothing to him and that she never did. It seems to finally sink in but they are both left heartbroken.

As the pupils flock around Sarah-Leanne, the other professionals are left at a loose end. Pete is philosophical about this, not least because it means he can get to know Steph a little better. Before long, fantasy becomes reality as they slip into the store cupboard for a few ‘extra lessons’. Meanwhile, Phillip is desperately trying to be ‘one of the lads’ and dared by Bolton and Paul, he approaches Sarah-Leanne to ask her out on a date. His embarrassment causes him to dry up and Bolton shoves him into her. Phillip ends up with his hands firmly on her ‘talents’. Phillip’s smart remarks have been getting on Kim’s nerves all day and for her, this is the final straw. She drags him off to the office where an embarrassed Rachel has to admit her personal connection to him. As Eddie escorts Phillip to the cooler, Kim heads off to apologise to Sarah-Leanne. She’s blasé about the incident and Kim is stung into anger yet again. This time, she is brought up short when Sarah-Leanne reveals that she didn’t actually drop out of Waterloo Road, she was kicked out for getting pregnant. Realising that she may have been over judgemental, Kim apologises and the two women reach a truce.

Chlo can’t get Kim’s reaction out of her head and realises that by getting pregnant and picking hairdressing over her A’ Levels, she has narrowed the choices she once had. There’s also the nagging sensation that Izzie would have been hugely disappointed in her. Feeling trapped and confused, she walks out of her hairdressing NVQ exam. Later, she confides in Kim – she wants to go to University, but now believes that she’s left it too late. However, Kim believes that with a lot of hard work – and support from Donte and Tom – she will be able to catch up on the work she’s missed. Tom’s delighted when Kim breaks the news – she’s only been back for five minutes and already managed to sort out his family for him – but Donte’s most definitely not.

It’s the end of the day and Janeece waves a cheery goodbye to Sarah-Leanne. She’s sad to see her idol go, but at least Sarah-Leanne has left her with the name of a good plastic surgeon... and a guaranteed discount on a boob job. Across the car park, Rachel and Phillip are also heading home when Eddie approaches. After Phillip’s embarrassing incident, Eddie has come to the decision that he can’t just abandon the lad and offers to help Rachel look after him. Rachel refuses, why should Eddie do anything to help her after what Melissa did to him? Eddie finally admits that he never really loved Melissa; he was just tired of being alone...