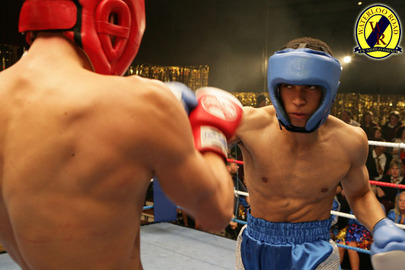 It’s the last day of term at Waterloo Road and everyone is excited about Bolton’s boxing final. Rob is adamant that Bolton’s about to be Rochdale’s next Rocky and a loved up Jasmine is bursting with pride for her man. However, Bolton’s nerves are getting to him, Rob offers Bolton some help – a bottle of ‘legal’ pills. It’s not long before Bolton is energised and raring to go. Today is also the day Eddie and Melissa fly off to their tropical wedding destination and the stress is getting to Philip. Melissa intends to tell Eddie everything – but not until they’re alone together. However, Philip overhears Melissa talking about her plans for the ‘big day’, and he tries to stop the wedding by taking her passport.

Denzil is back at home and about to start back at school. Rose is over the moon – finally it looks like the Kelly family is on the right track. But there’s a major shock in store when she discovers that she’s being evicted from her home. Tom feels partly to blame for the turn of events and together, he and Rose head off to the Housing Association to get the decision reversed. Rose’s pleas fall on deaf ears – she and her family are homeless! Back at Waterloo Road, Denzil is still struggling in his lessons and getting more and more frustrated. Jasmine doesn’t think he’s lacking in intelligence and suspects that he may be dyslexic. A test proves it. Rachel is extremely impressed by Jasmine’s initiative... as is Denzil – maybe he’s not a thicko after all.

Bolton and Rob head to the match, but the nerves hit again and Bolton finds the pills. After a trip to the dressing room, Janeece returns to the hall and casually mentions to Davina that Bolton’s taking pills. Davina is immediately suspicious and once the bout is underway, she sneaks into the dressing room, grabs the pills and presents them to Jasmine. Of course, Jasmine is dismissive at first – they’re probably just vitamin supplements – but slowly she comes to realise that Davina is right to be concerned. Even if the pills are totally innocent, they should be checked out. She confronts Rob but he fobs her off. Up in the stands, Rachel is concerned by how quiet Phillip is, even more so when he excuses himself to get some fresh air. Meanwhile, Melissa is horrified to discover that her passport is missing.

Bolton knocks out his opponent and wins the fight. Rob’s made up – his boy has done it! However, Jasmine is insistent that the pills should be checked out. Rob insists that he’s done nothing wrong, but the result of the fight is put on hold pending tests. Bolton is gutted, as is Rob who continues to claim that the pills are just vitamins – it’s all Davina’s fault – she’s always had it in for him! He begs Jasmine to back him up, but she refuses to lie. When Rachel hears the news she’s furious – how dare Rob play God with a pupil like this? She suspends him pending a full investigation. Rob’s childish reaction to the news is a dash of cold water in Jasmine’s face – she can see now that he put his own need to win over the safety of a pupil. Rob apologises but it’s too late. As far as Jasmine’s concerned, they’re finished.

Chlo puts her foot down with Donte. Unable to pay the extortionate rent on their flat any longer, they’ve been bedding down in the Chlo’s Cutz van and she’s had enough – she wants to move back to Tom’s. Donte’s mortified and has a lot of pride to swallow as he and Chlo, bags in hand, head back to Tom’s house... just as Tom and Davina invite the Kellys to stay. Meanwhile, Ralph in livid when he realises that Flick and Marley are back together and offers Marley £5,000 to stay away from his daughter. Marley tells him what he can do with his money, but when he and Rose have scoured the papers for an affordable house and come up with nothing, Ralph’s bribe starts to look more tempting. Later, with Ralph’s money in his pocket, Marley breaks Flick’s heart.

From his strange behaviour, Rachel comes to the conclusion that Phillip is hiding something – probably even Melissa’s passport. She quizzes him until he cracks and finally reveals that his mum is still married. Worse, she’s married twice. Rachel forces Melissa to fess up to Eddie. Although he’s clearly reeling, Melissa decides that it’s time to get everything out in the open and reveals that Rachel is in love with him... and she knows that he feels the same way about Rachel. It’s time for him to choose – Rachel or her. Rachel turns and leaves, needing some time and space to get her head around everything that’s happened. She’s just about to climb into her car when she hears a voice behind her. It’s Eddie...