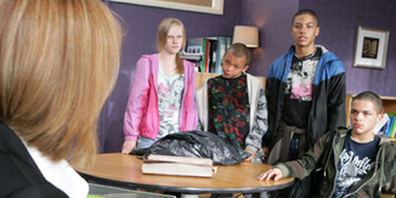 It's the start of a new term at Waterloo Road and following the fire that nearly destroyed the school. Rachel, who has suffered burns and mental scarring, is keen to bury herself in work and get the school back on track. She outlines her new initiatives: the implementation of a full extended services programme for the community and a no exclusion policy for pupils. This is the year Waterloo Road serves everyone. Rachel's commitment is put to the test before lessons have even begun when a cab pulls up and out roll the Kelly 'family from hell'. Mum Rose has five kids; Marley who's keen to keep his head down and make a go of the fresh start, Cheeky Sambuca, Denzil the 11 year old with learning difficulties and little toddler Prince. But it is 15 year old Earl who is the borderline psychopath intent on making his mark. Unbeknownst to all, he has a gun in his rucksack and Bolton and Paul make an early enemy of him when they jostle him in the corridor.

Elsewhere in the school, a new teacher is ruffling the feathers of a few female members of staff. PE teacher, Rob Cleaver is not only stunningly good looking, but his stretches and lunges are enough to get Steph and Jasmine in a lather - not to mention Matt! Meanwhile Grantly is sporting new look - a toupee. Paying no heed to Steph's warnings he struts out to lessons and sure enough the pupils fall about laughing. But Grantly's not deterred, he reckons he cuts a dash. And in the school's new workshops, Donte is busy with his pet project, a mobile hairdressing van for Chlo's business, ingeniously named 'Chlo's Cutz'. But when he excitedly unveils it to Chlo, she's less than enamoured, fearing he's just wasted even more money.

Earl is still nursing resentment towards Bolton and at lunchtime takes him and Paul, with Denzil tagging along, to the boys' changing rooms. He shows off the gun - he's boss now, okay? He forces a terrified Paul to clean his shoes to make amends for bumping in to him earlier. When Bolton and Paul eventually escape, Paul wants to tell Rachel about the gun but Bolton points out that Earl will come after them. They're the only ones who've seen the gun so it won't take him long to figure out who squealed. But the secret starts to eat away at Paul...

Unaware of the trouble brewing, Rachel is interviewing for the Head of Extended Services role. Much to Eddie's surprise she decides that one of the candidates, Melissa Ryan is perfect for the job. What Eddie doesn't know is that Melissa is Rachel's sister and the job was hers before she even came in. As Melissa leaves, Rachel finds an anonymous note under her door which turns her blood cold: 'There's a gun in the school'. She and Eddie hope that it is a hoax, but know they must follow procedure: a silent evacuation is immediately ordered and the police called. Earl is prowling the school when he sees the kids being led out. He grabs his brother Denzil who confirms they're being evacuated - someone's blabbed! Thinking fast, he manipulates Denzil into taking the gun.

The pupils gather in the playground as Eddie checks the school for stragglers, not realising that Denzil and Earl are hiding nearby with the gun and that Donte is also still working underneath the ChloMobile with his ipod blaring and no clue what's going on. Donte's tool slips and he cuts himself. He goes in search of a first aid kit and walks into the main building, to find it deserted. When he rounds the corner he comes face to face with a startled Denzil, who panics and accidently pulls the trigger. As a terrified Donte flees, everyone outside hears the gun shot and panic descends.

The police shout through their megaphones, demanding that Denzil come out. Despite Eddie's protests, Rachel goes back in to search for him, eventually discovering him scared and alone, hiding in the corner of the storeroom in tears. She manages to talk him down, promising him no one is going to hurt him, but when they walk out together, Denzil is wrestled to the ground by armed police and arrested. Marley looks on, knowing in his gut that Denzil had nothing to do with it, but powerless to stop him being taken away.

The school becomes a sealed crime scene. The pupils are sent home and the teachers head to the pub for a much needed drink. Eddie and Rachel head down to the police station with the traumatised Kelly family, who are in a state. The kids are relieved to hear Rachel's assurances that Waterloo Road isn't going to expel them for the actions of their brother. Later that evening, Tom and Davina have one last shock in store when they return from the pub, when they realise that their new neighbours are none other than the Kelly family...