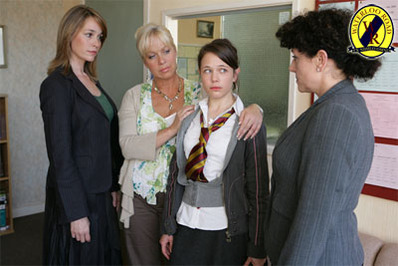 For her geography course work and indulging an interest in all things prehistoric Janeece has convinced Rachel to allow her and Karla to embark on an archaeological dig in the school playing field. As the two girls diligently search for Precambrian fossils, Grantly 'supervises', but even he looks up from his newspaper when a set of bones are uncovered. Grantly immediately recognises the tiny skeleton for what it really is and calls a halt to the dig before rushing off to alert Rachel and Eddie. He's sure the bones are those of a human baby. Rachel breaks the news to the pupils, several of whom look extremely worried... especially Mika! Eddie becomes unusually distressed whilst informing the staff of the find and waits until he's alone to pull a photograph of a tiny baby out of his wallet.

The police arrive on the scene and suspect the mother of the baby may be a Waterloo Road pupil. Rachel asks Steph to take charge of interviewing any older girls she suspects could be likely candidates. Steph leaps into the role of chief interrogator with relish and Detective Mellor looks on in amazement as Steph, displaying her own particular brand of tact as she cross-examines the girls about their sexual history. Next in line is Rhiannon Sedgewick. Rhiannon seems extremely edgy and jumps down Steph's throat when she questions her about the baby. When a subsequent conversation with Grantly reveals that Rhiannon took a couple of months off for 'stress' last term, Steph becomes convinced that she's found her girl. Triumphantly, she announces to Rachel that she's located the baby's mother and then sets off to contact Rhiannon's parents.

Karla is confused and angry that her dig has been interrupted and loses it in an English lesson. Davina is on hand to coax Karla into taking her medication, but her patience and powers of persuasion are severely tested. Grantly looks on in amusement - he knew it would only be a matter of time before Davina lost it with Karla. Later, Tom comes across Davina in the book cupboard. She's down and discouraged but Tom reassures her - no one else can do what she does. Meanwhile, Karla's still upset, prompting Aleesha and Danielle to seize the opportunity for some mischief. They wind Karla up, pushing her into putting together a petition to get the dig reinstated. Mika is furious when she reads the ludicrous petition and lays into Karla. Brett steps in but is left reeling when Mika reveals that she might be pregnant. Brett promises to stand by her, but Mika doesn't want his baby. Reluctantly, she goes with him to get a pregnancy testing kit. She's relieved when the test is negative, but Brett admits to being disappointed - he thought having a baby would bring them closer together.

Donte is struggling with his homework when Celine comes across him. She offers to help, but only after having a go at him for not working to his full potential - he's got brains, why doesn't he use them? Donte's amused - does she want to be a teacher when she leaves school, or what? He's stunned when Celine says 'yes', and is then forced to do some quick-thinking when she asks him about his career plans. Donte scratches his head, admitting that he'd just assumed he'd end up driving taxis like his dad. Maybe he should start putting some proper thought into his future. With Celine's encouragement, he manages to complete his maths homework for the first time. Later, over lunch in the canteen, he asks her out. Although she's concerned that Donte may still be carrying a torch for Chlo, Celine agrees. Chlo is in for a shock when she sees them together.

Matt's having a nightmare. He's created a monster in Aleesha, who is fast becoming the Prima Donna of Park Side Story. She refuses to take direction or criticism, determined that she knows best. Brett's ready to throttle her and Matt would cheerfully let him, if he had anyone else willing to take on the role - but as it is, he's stuck trying to keep her sweet - and Aleesha knows it. But it looks like disaster is about to strike when Davina walks in on Karla being given a dressing-down by some of the other pupils and quickly works out who's really behind her insensitively written petition. Eddie goes ballistic when he reads it and decides to take no prisoners. He throws Danielle off the school council and sacks Aleesha from the musical. Although disgusted with Aleesha, Matt is distraught - what the hell is he going to do without a female lead? Unwilling to allow Park Side Story to crash and burn, Rachel asks Tom to talk Mika into reprising her role.

Janeece is eaten up with curiosity about the discovery of the dead baby and tells Maxine that the police are sure to embark on extensive DNA testing to identify its mother, just like in CSI. Janeece is also concerned about Maxine who seems a lot quieter than usual. She discovers the reason for this when Maxine confesses that the baby was hers - the result of an unplanned pregnancy when she was a junkie. Distraught, she explains to a heartbroken Steph that the baby, Charlotte, was stillborn and that no one, not even the father knew about it. When the news is relayed to Eddie and Rachel, Eddie storms out - he can't take any more of the emotionally charged atmosphere. Challenged by Rachel, he reveals he has a young son that his ex-wife, Alison won't let him see. Rachel takes charge and sets off to find Alison's phone number.

Maxine is terrified that Lewis will hit the roof when he hears about Charlotte and so Eddie agrees to break the news. When Lewis is told that he almost became a father, his world is blown apart. Rather than blaming Maxine, he holds himself solely responsible for everything that happened. Later, Steph organises a low key memorial for Charlotte at the dig site and then tactfully retreats when Lewis turns up. He's developed a newfound respect for Maxine and as they sadly survey what was their daughter's grave, he tells her that maybe they'll have another one day. Meanwhile, there's a noticeable spark between Rachel and Eddie as they share an after-hours drink in the pub. However, the mood is ruined when Rachel pushes Eddie too far about the importance of making contact with his ex-wife and he storms out. Undeterred, Rachel picks up Alison's number and makes a call...