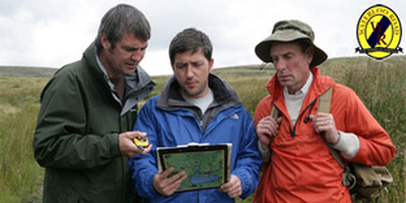 Surging ahead with a keen eye on inclusion, Eddie's decided to tackle the big problem of underachieving and disruptive boys and arranges to take some of the most difficult of them away on an outdoor adventure trip. Eddie has pushed the trip through despite reservations from Rachel and is convinced that all the boys need is to be given a sense of responsibility to put them back on track. Rachel can't help but fear the worse - she's convinced the trip will end up being a re-enactment of Lord of the Flies. Tom is reluctant to go on the trip - he's only just got his family back together and it's Chlo's first day back at Waterloo Road - but Mika and Chlo assure him they'll be okay. He joins Eddie, Davina, and an almost too eager to please Grantly, who's keen to show Rachel that he's taken her warnings to heart. However, when Candice arrives with Bolton's forgotten underwear, he can't resist showing Bolton up in front of his friends. Once on the bus, Bolton swears revenge.

Donte is back from temporary exclusion and runs straight into Chlo. Although initially it's very obvious he's pleased to see her, their first meeting turns into a face-saving exercise when Lewis turns up. With Lewis egging him on, he tells Chlo that he's glad it's over between them - marrying her was the biggest mistake he ever made. Unbeknown to Chlo and Donte, Rachel has observed their confrontation. She's worried that tensions are still high between Mika, Brett, Chlo, and Donte and decides to give them all the opportunity to clear the air. When Mika tells Rachel she never wants to see Brett again, he responds by requesting a transfer to another school.

Pupil, Sally Froggatt gets ready for school and then makes breakfast for her little brother, Ben. Their mum is on holiday in Spain and has left them home alone. Unable to contact the babysitter, Sally has no choice but to leave Ben alone and heads off for school. As the day progresses, Sally gets more and more frantic when she can't get hold of the babysitter. When her mobile phone is confiscated, she has no choice but to go home and check on Ben. On her way out of school, Sally is spotted by Rachel and lies about where she's going. Suspecting a truant, Rachel sends her straight to the cooler. Sally is frantic, but when she tries to tell the truth about what's really going on, no-one believes her. Back at the house, tragedy is about to strike when resourceful Ben manages to find his way out of the house and into an empty fridge left abandoned in the garage.

Donte apologises to Chlo for his earlier behaviour - he just wanted her to know what it feels like to be humiliated. He's been doing a lot of thinking and has decided that he wants them to get back together and make a fresh start. He's learnt from his mistakes and promises to work harder this time. But as hard as it is for her to accept, Chlo's moved on. She tells Donte that if he wants to change, he should do it for himself, not for her. Meanwhile, Rachel is determined not to lose her star pupil and decides to try and persuade Mika to talk Brett into staying. Mika's aghast - she's got to be joking? But slowly begins to see the point Rachel is trying to make - by leaving Waterloo Road, Brett will also be leaving her, Donte, and Chlo to pick up the pieces. She shouldn't allow him to take the coward's way out and force him to stand up to his mistakes.

Matt asks Jasmine to give him her professional opinion on the script for Park Side Story and is not prepared for her stinging criticism - bad dialogue, cliched characters - the whole thing stinks! Matt throws a wobbly and runs off to Steph for reassurance. Steph has the perfect way of dealing with Miss Smarty-pants and hands her the script - why doesn't she see if she can do any better? Although frosty at first, Matt thaws when he hears some of Jasmine's ideas. Maybe he should stick to writing the music and leave the script-writing to her.

Although Eddie has used underhand tactics to get them to hand over their stash of booze, Waterloo Road's bad boys soon get into the spirit of the trip. Eddie splits them into groups and promises a mystery prize to the team who finishes an arduous cross country trip first. Although nominated as a team leader, Bolton's determined to bring the trip to an early end. An ideal opportunity arises when Grantly makes himself a sitting target at the last checkpoint by swigging most of the contents of his hipflask and falling asleep. To Bolton's delight, there's a convenient pile of sheep droppings nearby, and he intends to drop one into Grantly's snoring and open mouth. But it's just out of his reach and he tumbles over the edge of the crag, knocking himself out. In a brave move and against the advice of the others, Eddie puts himself in real danger by climbing down to Bolton's ledge. Bolton is too terrified to move... or is he? Eddie realises he's been duped when Bolton scampers up the crag like a mountain goat. Sucker! Eddie's so shocked he loses his footing and tumbles off the edge.

Rachel decides to check out Sally's story. She phones her mum's mobile number and realises that Sally is telling the truth when she hears the international ring tone. Disaster is averted when she and Sally race back to the house and find Ben in the fridge. Rachel takes Sally and Ben back to Waterloo Road and leaves an angry message on Mrs Froggatt's phone. Later, when she comes to collect her kids, Rachel gives her very short shrift. But Rachel's anger is nothing compared to Sally's and she threatens to call the police if she ever leaves them alone again. Meanwhile, Eddie arrives back at the school with his neck in a brace. He's disappointed and he admits as much to Rachel. To his surprise, Rachel sympathises and admits that she wanted the trip to work as well. Over a drink, they reach a truce - it'll take both of them to crack the worsening problem of Bolton Smilie...