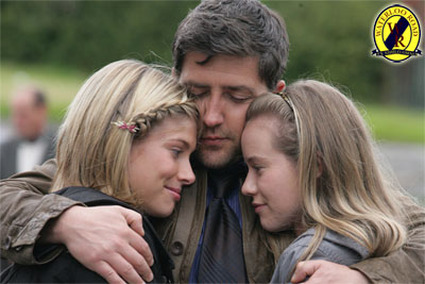 Waterloo Road is still reeling after Jack's shock departure, everyone that is apart from Eddie, who is relishing the prospect of filling in as Head until the end of term. However, he's hardly had time to warm Jack's chair, when he's dealt a bitter blow by Ria Cheetham - the LEA have decided to take matters into their own hands and appoint a new Head Teacher - Rachel Mason. Eddie's gutted, and it doesn't take long for them to be at loggerheads. The tension between them grows as Rachel introduces her plans for the school to become a 'Business Enterprise College' - she's decided that Waterloo Road isn't going to compete with academic schools, but concentrate on vocational-based training which will give the kids a better chance of finding jobs. Eddie is mortified - how can she know what's good for the staff and kids when she's been there less than ten minutes?

The staff room is buzzing when Rachel enters and introduces herself as the new Head. Stunned silence turns to incredulity when she outlines her plans for changing the status of the school. Steph's well up for that, it means she'll only get the bright kids in her 'academic subject' - French, which, given the fact she can't control the class, is a blessed relief. But Steph's ill-advised comments bring her to Rachel's attention. She immediately gets the measure of Steph, despite her frantic attempt to blag her way around the Head of Pastoral Care role. Rachel assures Steph that sheâ€™ll have her performance closely monitored from now on.

A desperate Tom and an unhappy Mika are still looking for Chlo. Unknown to them, she's contentedly sharing a flat with new best-mate, Lucy and her boyfriend, Shaun. When Shaun suggests how Chlo can contribute to the rent, her initial enthusiasm turns to dread when she discovers that they expect her to steal. Things go badly when she's caught shoplifting by a security guard and is bundled into the back of a police car. Tom is frantic when the police contact him with the news and immediately races down to South Manchester to collect Chlo from the station. However, when he arrives, he finds out that Chlo has been given her caution and has left in the company of her 'sister', Lucy.

In a desperate bid to pay off his debts, Grantly has resorted to gambling online using the school computers. When he's suddenly pulled away by Eddie - angry because Grantly has left Jasmine struggling to cope with covering Tom's class as well as her own - he forgets to close down the website and leaves the piece of paper with his login details. Luckily for him, Rachel finds the open website before Bolton and Paul can have a go... or should that be unluckily? After tearing a strip off Grantly, Rachel warns him that he's on his way out unless he can change his ways immediately. But Grantly's up for a fight and consults the Union... he's shocked to discover that they consider gambling on school computers a sackable offence! Realising he's been very lucky, Grantly stuns Eddie by very humbly apologising to Rachel.

As part of her scheme, Rachel cancels all classes for the sixth-formers for the day so that they can pretend to be entrepreneurs. As budding 'school photographers' Maxine and Janeece prowl around the corridors, trying to catch teachers unawares with Uncle Stan's digital camera, Tom enlists Aleesha and Danielle to help him get his school magazine idea off the ground. 'The Snapper' will be full of the type of stuff kids want to read, i.e. gossip, and a totally oblivious Steph is about to become their first target. Meanwhile, Mika is really struggling to come to terms with Chlo's disappearance, especially because she's the one who drove her away in the first place. Feeling increasingly isolated, she bunks off to the local off license for a bottle of vodka, finds a secluded spot, and drowns her sorrows.

A resentful Eddie is slowly beginning to think Rachel might be on to something when he sees how enthused the kids are acting as entrepreneurs. Brett is announcing the launch of his magazine, hell-bent on winning the prize for the best idea of the day when he's completely thrown by the arrival of Mika. She's drunk and emotional and gives him a dressing down in front of the whole room. Ignoring Eddie's pleas that he knows the background better; Rachel tries to intervene and ends up covered in Mika's vodka lunch. Despite her tough talk, it becomes clear that Rachel may have seen more of the vulnerable side of life than she's prepared to let on as she comforts a recovering Mika with some wise and reassuring words.

Chlo is horrified when she finds out just how Shaun and Lucy expect her to find the rent money following her failed attempt at shoplifting. She's got to turn tricks with their so-called customers for money! In a client's house, a trembling Chlo manages to put in a desperate call to Tom who is waiting frantically at the police station for news. With the police in tow, Tom makes a mad dash to the house to save her. But will he get there in time to save her from Shaun who has just caught her trying to sneak out of the house? The answer is yes. As Shaun, Lucy, and their client are taken away by the police, a jubilant Tom takes Chlo back to Waterloo Road to see her sister. Unaware of the emotional reunion going on outside, Rachel asks Eddie if she can rely on his support. His response? He walks out of her office without a word...