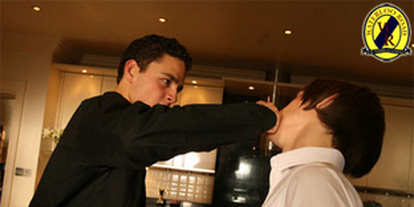 It's a day of heartbreak at Waterloo Road. Donte is on the warpath after finding his wife, Chlo and Brett in bed together. Unable to find Brett, Donte takes out his frustrations in the school car park by smashing up Eddie's car with a baseball bat. Eddie, understandably, is furious and all for calling the police. Although Jack manages to calm Eddie down, he can't be seen to tolerate Donte's behaviour and excludes him with immediate effect. Donte couldn't care less. He's sick of school. Sick of everything. Meanwhile, Mika can't understand why Chlo and Brett are being so distant towards her. Her confusion quickly turns to distress when Brett resigns from the musical and ends their relationship - why is he doing this when everything was going so well?

News of Chlo and Brett travels quickly through the school and Chlo is in a desperate state. She needs to find Mika and explain the situation before someone else gets to her first. But it's too late, Donte confronts Chlo and Mika in a corridor, and before Eddie can order him off the school premises, Donte reveals the awful truth. Chlo feels sick... what has she done? But before she has chance to consider it, Mika grabs her hair and a massive fight erupts. Tom is called from the staff room to separate Mika and Chlo - what a birthday this has turned out to be! He tries to bring order to what is total, total chaos, especially when Mika refuses to share a house with Chlo any longer. They can't all carry on living under the same roof now. Surely Tom can understand that? On top of everything, Chlo is rejected by her mates. Maxine and Janeece think that what she's done is about the worst thing they've heard. How could she do that to her own sister? Her new husband? It's disgusting.

Still smarting from the news of Jack and Davina's engagement, Steph has a good moan to Matt who can understand her point of view, but urges her not to do anything rash. But as Steph points out - if she was in Davina's shoes, she'd want to know exactly what she was getting into. Mind made up, Steph goes straight to Jack's office and tells him that his marriage will be a sham unless he confesses his affair to Davina. If the relationship is as strong as he says it is then the truth won't hurt, will it? Jack takes Davina out for lunch. He's determined to 'do the right thing' and fess up about his one night stand with Steph, but bottles it. He can't tell Davina the truth, she means too much to him.

Matt goes into meltdown when Mika announces that there's no way she can stand on a stage alongside Brett and promptly quits the musical. He's forced to wildly backpedal with Aleesha and convince her to take Mika's place. Although secretly delighted by this turn of events, Aleesha isn't finding life at Waterloo Road completely to her taste - trying to cram two years of GCSE study into one is seriously doing her head in. Eddie is getting increasingly concerned about Aleesha and the rest of the G&T kids in his maths class. He's sure that the pressure is proving to be too much for them. Backed up by Aleesha's mother threatening to take her daughter out of school because she's so unhappy, Eddie confronts Jack. Jack is adamant that the kids just need pushing; after all, the standards of the school are dependent on them. Eddie disagrees - Jack is on his own.

Donte pays Brett a visit and gives him a good kicking, leaving him in a sorry state. Chlo finds Brett nursing his wounds and pleads with him not to report Donte to the police, but Brett's not so sure. Feeling isolated Chlo returns home to pack her bags; life just can't get any worse. She's responsible for Mika's despair, Brett's assault, Donte's exclusion from school, and the outright disapproval of all her friends. Unable to spend another night under the same roof as Mika, she hastily packs her bags, leaves a note expressing her regret, and then goes on the run.

Unfortunately for Jack, a misunderstanding in the staff room takes matters out of his hands and Davina finds out the awful truth about his dalliance with Steph. She goes straight to his office and confronts him - did he sleep with Steph? He can't deny it. Davina hands him back his ring - it's over, she can't trust him anymore. Meanwhile, Tom returns home to find Mika in a distressed state and Chlo nowhere to be found. It's soon clear Chlo has ran away and what's doubly heartbreaking for Tom is that Mika couldn't care less, as far as she's concerned it's good riddance. Finally we catch up with the lonely figure of Chlo in a cafe being 'befriended' by Lucy, who is only too happy to look after her in her hour of need...