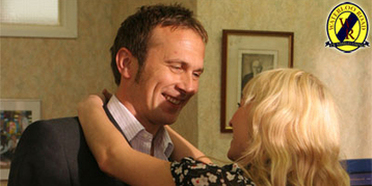 Steph's still loved up following her passionate clinch with Jack and is determined to take it to the next level - she's booked the honeymoon suite at a local hotel and has bought some sexy new undies. She's crushed when Jack point blank refuses her advances and makes it very clear that they just had some fun, with absolutely no chance of a repeat performance. Meanwhile, Danielle is a lot luckier in love and she and her boyfriend, Ben McNulty indulge in a sneaky snog and some fooling around in the Art room. Disaster strikes when Ben falls off some scaffolding into the half-finished musical set, leaving him with a bleeding head. Matt injures himself in his efforts to help and is surprised when Ben recoils in horror. The situation becomes even more bizarre when the usually apathetic Steph swoops in and anxiously rushes Ben to A&E.

Chlo is feeling guilty about having slept with Brett in her and Donte's new flat. She's determined to stay in the flat to please Donte even if she's really missing Tom and Mika. Tom wants Chlo back in the Grainger household, and if that means Donte as well, then that's what will happen. He waits until English to approach Donte and share his concerns about Chlo's happiness and the problems she's having with her schoolwork. He points out the financial benefits of living back in the Clarkson-Grainger household and even offers to convert the loft into a bedroom with private en-suite for them. Donte is reluctant to give up his and Chlo's independence, but loves her enough to want the best for her.

It turns out that Steph knows a lot more about Ben than she's letting on. He has HIV as a result of his birth-mother's drug use and Steph has promised his adoptive parents that she'll keep his condition a secret from everyone, Jack and Eddie included. While Steph is tied up at the hospital, Mrs McNulty arrives at the school in a panic and runs into Eddie. Matt is called to Jack's office - he thinks he's about to get a ticking off for leaving Ben on his own in the art room, but instead, he is on the receiving end of some shocking news - Ben is HIV positive. A shell-shocked Matt turns to the Internet and discovers that he needs something called a 'Post Exposure Prophylaxis' (PEP). He's still furious that Steph watched him patching Ben's head and did nothing to stop him and confides in Jasmine before leaving for the hospital.

Up in the Head's office, Jack's furious with Steph for keeping Ben's condition a secret. Eddie's more sympathetic - HIV is a non-notifiable disease and therefore Ben's parents had every right to ask her to keep it a secret. Meanwhile, Danielle and Aleesha are annoyed when their drama lesson is cancelled and demand to know why. Jasmine lies and tells them that Matt has taken Ben to the hospital. Big mistake. Danielle and Aleesha know that Steph was the one to take Ben to hospital and that, combined with Jasmine's shifty demeanour makes them suspect that something very fishy is going on. When the coast is clear, they go to snoop around Matt's office where the results of his Internet research are there for all to see on his computer screen.

Thanks to Aleesha, Ben arrives back at Waterloo Road to discover that his secret is out. Girlfriend Danielle is bricking it - she has been snogging him after all - and his best mate, Bolton is disgusted and orders Ben to stay away from him in future. But even worse is to come when Lewis - assuming that anyone with HIV must be gay - erupts into a homophobic rant in front in the packed school canteen. The news travels through the school like wildfire and Jack is soon on the receiving end of frantic phone calls from angry parents. As he and Steph meet with Ben and Mrs McNulty, a much calmer Matt returns to the school. He's appalled when he learns that Ben has taken the decision to leave the school and makes his feelings known to the cast of the musical, Aleesha in particular. Unable to work with a room full of narrow-minded bigots, he cancels that afternoon's rehearsal.

Although Jack has failed in his efforts to persuade Ben to stay on at Waterloo Road, his determination to support and include him have deeply touched Davina. As far as Jack's concerned, he's convinced that Davina is 'the one' - and perhaps a little guilty about his transgression with Steph, he whips out an engagement ring and proposes. There are congratulations in the staff room when Jack and Davina make their announcement, but will a rejected and gutted Steph manage to keep her mouth shut about their recent night of passion? In the meantime, she's desperate to find a pair of arms to rebound into and makes a beeline for Matt. Her jaw hits the floor when Matt turns her down flat... his reason? He's gay.

Under pressure from Donte and Mika, Brett and Chlo agree to restart the French tutorials. They both worry that if they don't, sooner or later someone's going to wonder what's going on. So they quickly come to an understanding - surely it can't be that difficult to keep their true feelings under control? To show that they can get along together, Brett gives Chlo a lift home and gives her a present of a French novel. For the first time, Chlo feels someone is taking her seriously. She can't help herself when she and Brett look into each other's eyes and end up heading for the bedroom, after all they'll be alone in the house, and Donte is back at the flat... isn't he? Unbeknownst to them, Donte has been planning a romantic night chez Grainger to celebrate their homecoming and has been laying a table in the garden all along. He phones Chlo to find out what's keeping her... odd, why can he hear her mobile ringing upstairs? All becomes clear when he opens the bedroom door...