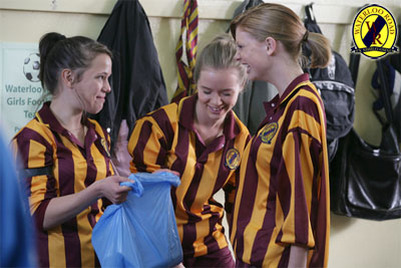 Jack has an early morning session with his therapist. He's frustrated, not even knowing what he's doing there - how can a counsellor possibly know what's going on in his head better than he does? But when he talks about Izzie's death, the bravado crumbles and it's clear he's still suffering from 'survivor's guilt'. After his therapy session, Jack drops Davina off at the train station. He's a bit miffed that having persuaded him to go back into therapy, she's leaving him to deal with his can of worms alone. Still, the course is only going to be for two days and they have a romantic weekend away in Paris to look forward to on her return.

Today is Waterloo Road's first ever girls' football match and Tom is preparing the team to give it all they've got. The girls are determined to look good on the pitch even though their football skills may not be up to scratch. Thanks to Jack's novel use of the budget, there's no money available for a new strip. Janeece and Maxine decide to take matters into their own hands and scam two hundred pounds out of the local residents by flogging tickets for a fake raffle with the promise of a week in Marbella as the top prize.

Unknown to Chlo, Donte is taking his role as husband seriously and spends their wedding money on a deposit for a flat. After taking the morning off school, Donte tells Chlo that he's got a surprise for her. He shows the scuzzy flat he's rented, and spent the morning moving them into. Chlo can't believe that Donte could have made a decision like this without consulting her first, not to mention the fact that it's a complete hole... a complete hole they have no hope of affording. But it seems that Donte has it all worked out, he's even got himself an evening job waiting tables. Meanwhile, it's all very awkward at school between Chlo and Brett when he asks her if she's still up for a French tutorial that evening. She's trying to pretend to herself that she can't feel the chemistry that crackles between them and agrees - why not?

Jasmine is having the day from hell. She can't control her class and loses it big style by throwing half of the football team into detention, jeopardising the big match in the process. Tom's furious when he hears the news and, in the face of this, Jasmine flees. When Eddie finally manages to find her in the school grounds, she breaks down - all of the kids hate her, even more now she's scuppered the football team's chances. Having already spoken to Tom, Eddie suggests that they postpone the detention, something that will save the match and Jasmine's face in the process. Eddie also suggests that a way of securing a good relationship with the kids is through extra-curricular activities - maybe Tom could do with some help?

The musical is gathering pace, but Steph is beginning to get right up Matt's nose, not least when she overrides his casting decisions and appoints Mika and Brett in the lead roles. She's a complete romantic at heart and feels they have the X-Factor because they're already a couple. Besides, Mika's main rival for the lead, Aleesha, is a little madam and bound to become a complete diva at the first whiff of greasepaint. Matt disagrees - Aleesha has the better voice - but now that Steph's made the decision for him, there's little he can do but put up with it. A furious and tearful Aleesha seethes. She's got bags more talent than Mika... she's been robbed. It's got to be a fix.

Janeece and Maxine are delighted when they discover that after buying the new football strip, they have enough money left over for a pair of trendy trainers each and plenty of bottles of cider for after the match. Back at the school, the pressure is really starting to take its toll on Jack. Not only has he been grilled on budgets by school adviser Ria Cheetham, but he's also got to deal with a gang of irate local residents, all of whom have been ripped off by Janeece and Maxine's scam. Jack is livid when he is forced to raffle off his and Davina's romantic getaway to Paris in order to appease them. Things are no better on the pitch. Waterloo Road girls are 2-0 down at half-time, and when Janeece and Maxine decide to scarper, the first match of the season looks like it's going to be a whitewash. Enter Jasmine - she reckons she's young enough to pass for a schoolgirl and persuades a reluctant Tom to risk expulsion from the league by bringing her on as sub. It turns out that Jasmine is a demon player and, after she sets up two goals for Chlo, the game ends up a draw.

Brett arrives at Chlo and Donte's new pad for another French lesson. He and Chlo can't keep their hands off each other and it's not long before they're falling into bed. Afterwards, both are wracked with guilt. Later, Donte returns home from work with a takeaway and finds Chlo in tears. Desperate to feel something she doesn't, she falls into his arms. Meanwhile, Steph's crushed when Matt turns down her offer of a dinner a deux, but brightens up when a frazzled and frustrated Jack asks her if she's up for a drink. But Jack is slow to realise that popping pills on top of a shed-load of vodka is a recipe for disaster. He and Steph end up enjoying more than just a heart to heart and a few drinks...