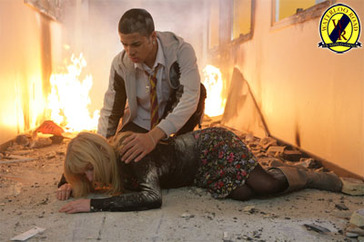 It's the last day of term at Waterloo Road and Rachel is on top of the world now that Hordley is off her case and her plans for the school are finally coming together. There's also a chance for her to show off - she's organised an end of term Spelling Bee, followed by a girl's football match against posh rival school, Forest Mount. The sense of school spirit has never been stronger and Rachel's revelling in it. Into this mood of optimism steps Eddie. He's discovered that Hordley has sent copies of an incriminating newspaper article exposing Rachel's past to every member of staff. Managing to collect them all before the teachers do, he prepares to break the bad news to Rachel. However, when he realises how happy she is, he realises that he can't burst her bubble and, after distracting her for long enough to grab her copy of the article, he dumps them outside in the bins.

Michaela looks on in astonishment as Donte, Brett, Mika, and Chlo take it in turn to fire long words at Karla - looks like she's going to be the school's secret weapon in the upcoming Spelling Bee. It doesn't take long for Michaela to turn this information to her advantage, namely by running a book and conning the Forest Mount kids into betting large amounts of cash on what's obviously going to be a resounding defeat for Waterloo Road. Back in the staff room, the only person who isn't excited about the battle ahead is Grantly - in his day, spelling tests were the norm, certainly nothing to get excited about. But it appears that Grantly has more important things on his mind and he's soon spotted hanging around suspiciously in the car park, trying to head off Mrs Hanson from the examinations board. She's discovered that there's been extensive cheating in the English department and is determined to get to the bottom of it.

In front of a fired-up audience of kids, parents, and teachers, Waterloo Road storms to victory in the Spelling Bee. It's a proud moment for Rachel as she stands up on the stage to make a speech, but she's stopped short when Hordley erupts into the hall and shouts her down, exposing her past as a prostitute. As Eddie, Tom, and Matt kick him out, Rachel decides that she has no choice but to confess all. In front of everyone assembled, she admits that she was once a prostitute - it was the lowest point in her life and something she bitterly regrets, but it's all true... she's sorry. Everyone is stunned when Rachel leaves the hall, but before long, applause breaks out and one by one, the pupils stand to show their support for their head teacher. Although she hears the applause, Rachel's in tears as she heads back to her office, convinced she's finished at Waterloo Road.

Eddie arrives in Rachelâ€™s office to find her clearing out her desk. He tries his best to persuade her to stay - she's the best thing thatâ€™s ever happened to the school and everybody knows it. But Rachel's adamant, she won't have the kids hounded by the press and Waterloo Road dragged through the gutter. It's over. Meanwhile, Rachel's staunchest supporters do their best to turn the tide against her: Candice is extremely vocal in her defence of the only teacher who's ever been able to get through to Bolton. Up in Jasmine's class, Dominic produces one of the newspaper cuttings Eddie threw in the bin and threatens to put it up on the Internet. Bolton won't hear anything against Rachel and dives in, fists flying. Later, he confides in Davina. He's angry, upset, and confused - what's the point in trying to change if people only ever remember the bad stuff you've done?

Back in Rachel's office, Eddie makes a confession: he told the Council about Hordley's illegal use of child labour and as a result, Hordley lost all of his contracts. Hordley's decision to expose her past is all his fault. However, before Rachel can reassure him, there's a knock at the door. Mrs Hanson has finally managed to track Rachel down and informs her about the extent of cheating in the school. Prepared to fight for the school's reputation, Rachel takes charge and assembles to English department - why didn't the cheating come to light during routine coursework moderation? The answer is simple: because no moderating went on. The rest of the staff, Jasmine and Matt in particular, are quick to pin the blame on Grantly and his lazy ways and a squabble soon ensues. Rachel breaks it up and then orders Grantly into her office. She has no choice but to suspend him. With Grantly gone, Tom is made acting Head of English and placed in charge of the investigation. He's appalled when he sees Chlo's name on the list of cheating pupils.

To Tom's dismay, Chlo admits that she cheated. Tom is hurt and angry - how could she do something like this? He hopes that the salon will take her on full-time, because she stands a good chance of being excluded. Chlo's response? Fine! She'll spend her first week's wages on a deposit on a flat. As Tom and Chlo storm off in different directions, Hordley's smoking furiously by the bins. Realising he's got nothing left to lose, he throws his fag-end away and sets off in search of Rachel. He runs into her on the stairs, determined to make her pay for ruining his life. Rachel has other ideas and kicks him where it hurts. Hordley crashes down the stairs, badly injured.

Candice trips over the tube connecting a gas canister to the heater and is called away from the kitchen before she can smell the leaking gas. As Hordley's smouldering cigarette sets the bins alight, there's a massive explosion as the gas ignites, sending a fireball ripping through the school. There's widespread panic as kids, parents, and teachers try to flee the flames. Bolton rescues Davina in the aftermath of the blast, but their luck runs out when they run into a chained door. Elsewhere, Chlo is trapped inside the girl's toilets as flames consume the corridor outside. With no way out, she fumbles her mobile phone out of her bag and calls Donte. Outside, Celine is terrified when Donte receives Chlo's call and begs him not to go after her, telling him she's pregnant. Shocked, but disbelieving, Donte storms off.

Tom's worried about Davina, but is overjoyed when he and Donte manage to safely rescue Chlo. Although distraught after her ordeal, Chlo admits that the worst thing was the thought that she'd never have the chance to make it up with him after their row. However, Tom's joy is short-lived when Mika spots Davina being carried out of the school, unconscious. As Davina is taken away in the back of an ambulance, Eddie's beside himself with worry. Rachel's still inside the school and the fire-fighters won't let him back in to find her. Inside, Rachel's on her way towards the nearest exit when she spots Hordley unconscious on the floor. Even after everything he's done to her, she can't leave him to die. But as she starts to drag him out, the roof collapses, burying her and Hordley with it...