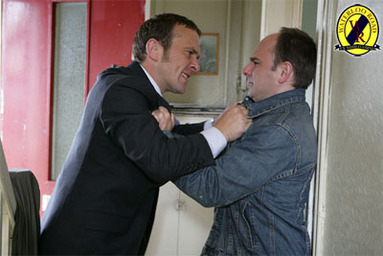 A fight club is in full swing at the school, with Bolton Smilie and recently orphaned Paul Langley at the centre of it. Rookie teacher, Jasmine suspects Paul is being abused and raises her concerns with Steph. Already feeling the weight of her new responsibilities as Head of Pastoral Care - chasing after truants in heels is not her idea of fun - Steph quickly dismisses Jasmine's concerns as a lack of confidence. Convinced that Paul is putting on a brave face, Jasmine decides to trust her instinct and consults Eddie. Her suspicions are confirmed when Eddie finds Paul struggling for breath following a beating. He goes to confront Steph about her decision to give Jasmine the brush-off and is gob-smacked when he tracks her down to the drama studio, bellowing out 'Cabaret' with Matt accompanying her on the piano.

Karla's entitlement to support has seen Davina being drafted in as a permanent fixture in her lessons. Grantly's personal take on the school's inclusion policy is to declare an exclusion zone for her in his classroom, much to Davina's disgust. Davina is more determined than ever to help Karla, and Jack agrees to her request to attend a residential course the following week - 'Asperger's in the Classroom'. But with Jack's increasing dependency on anti-depressants and recurring nightmares about Izzie's death, how will he cope without Davina by his side?

Eddie sets about rounding up the usual suspects and pulls no punches in his attempt to get the boys to fess up. It takes a trip to the school kitchen and a bout of crocodile tears and emotional blackmail from Bolton's mother, Candice before the truth finally comes out. Bolton reveals that Paul wanted him and the others to toughen him up so that he could stand up to his physically abusive Uncle Dermott. However, when confronted, Paul denies everything, accusing Bolton of making the whole thing up in order to lie himself out of a corner. The truth is that Paul has decided to deal with the situation himself. He waits until lunchtime to steal a knife from the canteen and then heads off home to confront his Uncle.

Lunchtime auditions for the musical are taking place and Steph's thrilled to be a part of it - playing Sharon Osborne to Matt's Simon Cowell is a lot more fun than all of the pastoral palaver. After dazzling Matt and Steph with her rendition of 'Lady Marmalade', Aleesha returns to her current favourite pastime - winding Karla up with best mate, Danielle. The minxy duo tell Karla she's got a great voice and persuade her to audition. What follows is a show stopper of a performance with Steph on the receiving end. Karla flees and, by the time Steph recovers herself enough to go after her, she's disappeared.

New kitchen assistant Lewis Seddon goes to see Jack and Eddie with some shocking news - a knife has gone missing from the kitchen. Hot on the heels of this news is Jasmine's revelation that Paul didn't turn up to afternoon registration. Jack's all for handing the matter over to the police, but Eddie manages to talk him round - he's desperate to save Paul from a potential murder charge. They race around to Paul's house and, while Jack subdues the very disturbed and violent Uncle Dermott, Eddie manages to talk Paul into giving up the knife. The police are called and Uncle Dermott is taken away to a mental health unit for treatment for the acute depression that runs in the family, the same depression that caused Paul's mum to commit suicide. Eddie is unwilling to abandon Paul - he needs more than foster care and whatever counselling the local authorities can afford to provide. Jack agrees and puts Eddie in touch with a youth worker who specialises in teaching kids how to channel their aggression with Tae Kwon-Do.

Davina suspects Karla's disappearance is something to do with Aleesha and Danielle, but her questioning of them is cut short by the arrival of Lewis. He's found the "asparagus girl" and has managed to coax her out from her hiding place behind the bins with a symmetrical plate of Potato Waffles. As she attempts to calm Karla down, Davina decides she's personally going to have to put in all the hours God sends to give her the support she deserves. Meanwhile, Steph is in for a telling off when her lack of attention to Paul and Karla is exposed and a furious Eddie makes his feelings known to Jack. She's given a reprieve when Jack decides not to toe Eddie's hard line to sack her. Not off the hook completely, Steph is given an ultimatum - shape up or ship out.

Tom is worried Chlo's head is so full of being a wife to Donte that she's not going to pass her mocks and asks Steph to give her extra French tuition. Chlo hates the idea, but is delighted when Mika suggests that Brett tutor her instead. He quickly blows Chlo away with his knowledge and easy manner - what a contrast to Donte's macho posturing. It's soon clear that there's more than just French on the timetable when an unexpected chemistry develops...