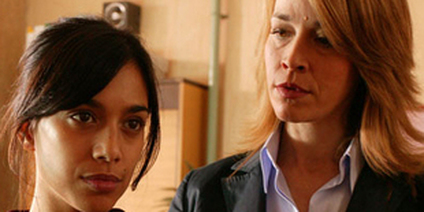 At dawn a terrified Sameen, wearing only her pyjamas, breaks into the school's changing rooms through a window, cutting her hand in the process. Quickly, she changes out of her pyjamas and into her football kit - luckily, the team have an early morning training session in preparation for a big match that afternoon. Tom's encouraged by Sameen's 'enthusiasm' when he finds her already changed and waiting, meanwhile, the rest of the girls question her cut hand. On the pitch, Sameen's on form, but hogging the ball and refusing to pass. Left out in the cold, the other girls make no secret of their irritation. Tom's also angry with Sameen for abandoning her role in defence, but even he is taken aback when she throws a hysterical strop and storms off the field. When Sameen goes on to lie about her uniform being stolen, a worried Tom speaks to Rachel. Sameen is sent to the cooler when she refuses to say why she turned up to school in her pyjamas.

Chlo starts handing out flyers advertising an after-school salon service. Although Tom has agreed to allow her to find a Saturday job, he'd go mad if he found out about this latest enterprise, especially if he were to find out just how much her coursework is slipping. Davina meanwhile is impressed with Chlo's initiative and urges her to go for it - not everyone is cut out for school, and maybe it's about time Tom realised that. Tom is furious when Davina confronts him and tells her to mind her own business - they're his girls and he knows what's best for them. Davina backs away, telling Tom that if he's trying to use Chlo and Mika to drive her away, then he's succeeding.

Immigration officials arrive at the school looking for Sameen. Earlier that morning, she escaped from the detention centre where she and her family were awaiting deportation to their home country of Iran. Rachel calmly lies and tells them that Sameen hasn't been in school for a couple of days. Rachel is barely unable to conceal how incensed she is at Sameen's treatment and the officials leave, not quite convinced she's telling the truth. In the cooler, a petrified Sameen explains to Rachel that her mum told her to run away from the centre and most importantly, to finish her education. Rachel is supportive - if that's what Sameen wants, then Waterloo Road is 100% behind her. Rachel contacts the local MP and marshals the teachers into putting together a file supporting Sameen's status as an outstanding pupil at the school, and justifying Rachel's request that she be allowed to continue her education in Britain.

Eddie's furious when he realises that Rachel hasn't called the council and reported Stuart Hordley's crooked dealings. Rachel apologises, but points out that if Hordley loses the contract, she'll lose her job when the truth about her past gets back. She's just not prepared to destroy everything she's worked for. Eddie's not one to give up so easily and decides to take the matter into his own hands. He goes straight to Hordley's office and warns him off the contract and Rachel, or else. Satisfied, Eddie returns to school and runs into Bolton, who's overslept again. Later, Candice confirms that Bolton's been working long hours for Hordley. When he hears that Hordley's also employing under-age labour from other schools in the area, Eddie realises that he's finally found some real ammunition. He persuades Rachel to lure Hordley to the school and reluctantly, she agrees to go along with his plan.

Still in search of Sameen, the Immigration officers return. Sameen, Aleesha, and Danielle leg it to the changing rooms and barricade themselves inside... there's no way they're giving up without a fight. Eddie is worried Rachel may have given her false hope that they can change the Home Office decision to send Sameen back to Iran and manages to squeeze past the barricade. Sameen has a difficult and important decision to make and it's crucial that she realises the impact it could have on the rest of her life. Rachel also tries her best to help Sameen weigh out the pros and cons. On one hand she doesn't want to let her mum down and knows that she would have no chance of a proper education back in Iran, but on the other, she might never see her family again. It's painful, but at last, she makes her decision - she wants to be with her family. The teachers and Sameen's devastated friends gather to watch her being taken away.

Tom finds one of Chlo's flyers and, when he finds out from Steph that she's missed handing in an essay, he's furious. Chlo complains to Maxine about the pressure she's under to keep up with her school work and is stunned when Maxine shares the secret of her own recent coursework successes - a website with ready prepared coursework essays! Chlo is reluctant - it is cheating after all - but relents in the face of Maxine's confident urging - no-one will ever know. Later, Steph is happily surprised by the quality of Chlo's latest essay and awards her an 'A'. Tom is really pleased when Steph informs him that Chlo's work is taking an upturn, but his good mood fades when he runs into Davina in the car-park. Davina knows that she can never be a part of his family and, as long as she continues to feel like an outsider, they have no future. Maybe it's about time they both admitted that it's over between them.

Hordley turns up in Rachel's office and demands she order Eddie back off. He's unaware that Rachel is taping every word on her mobile when she asks him just how long he's going to carry on blackmailing her. With his threats on tape, she has all the evidence she needs to send him down for five years and he knows it. It's a double-whammy when Eddie arrives with proof that Hordley's been using illegal child labour. Hordley responds by taunting Eddie about Rachel's past - has she been giving him free sexual favours? Eddie loses it and punches him one. As Hordley staggers out of the school, Eddie's happy that they've finally seen the back of him. Rachel's not so confident..