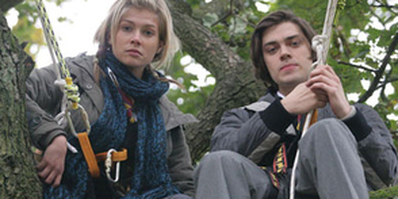 Over breakfast, Mika announces her plans to travel to London to join an environmental protest where she plans to meet up with her new eco-guru, Leon. Tom is dead set against the idea, especially when he learns that Mika met Leon on the Internet, and flatly refuses to let her go. But that's not the end of his headache - Chlo is still planning on becoming a hairdresser when she leaves school and has decided to set the ball rolling by looking for a Saturday job. Tom flatly refuses to take her ambitions seriousl - does she really want to spend the rest of her life giving blue rinses to pensioners? - and orders both girls to concentrate on their school work.

Frustrated by Tom's refusal to allow her to go to London, Mika decides that she and Brett should prove their eco-warrior credentials on the building site of the new Waterloo Road Training Centre. Brett's still keen to curry favour with Mika, but even he's shocked by the lengths she's prepared to go to in order to save an old oak tree... like playing chicken with a huge JCB. With Mika and Brett refusing to move, work on the site grinds to a halt. Oblivious of the protest outside, Rachel counters Eddie's plans to resign by winding him up with her plans to advertise for his replacement, and then later, by freezing him out of the effort to contain the eco protest - why should he care? He'll be off soon. Eddie's mood doesn't improve when Steph shows him a bounced cheque from Stuart Hordley.

Rachel decides to leave the job of talking Mika down to Tom, making it very clear to him that if he doesn't get through to her, she'll be facing exclusion. Tom's incensed by Mika's behaviour, not least because she's risking her future, but she tells him to get lost - the environment is a lot more important than stupid exams. Some of the more impressionable students have jumped at the chance to join in the protest - anything to miss out on double-maths - but things look set to escalate a lot more quickly when Leon, Mika's Internet eco-guru pitches up with reinforcements. After setting up a protective wire fence around the tree, he, Mika, Brett, and the others climb up and occupy its branches. Rachel wastes no time in calling together a meeting of the school council and Brett is all for climbing down to negotiate. Mika tells him he's wasting his time, action is what's needed.

It's all too much for Chlo when budding travel agent Donte impresses everyone with a spot of role-play in Matt's class and she storms out. When Chlo admits that she wants Donte back, Maxine's advice is to make him jealous - she should call Dikran, the guy the met the other week, and ask him out on a date. Donte can't help but notice how good Chlo looks in her customised uniform, nor the flash sports car Dikran is driving. He can't take his eyes off her, something Celine picks up on immediately. Despite her ulterior motives, Chlo actually finds that she's enjoying her lunch with Dikran. He's very supportive of her plans to go into hairdressing and urges her to go for it - look at all of the people who have made it big cutting hair - there's nothing stopping her from starting up her own business. Inspired, Chlo goes straight into town and sorts herself out a Saturday job in a salon. Tom is incensed when he spots her trying to creep into school... as far as he's concerned, both girls are completely out of control.

Mika is captivated by Leon's environmental rhetoric and politics and doesn't care that Brett has managed to negotiate most of their demands. Before he can get back to the site to tell them what Rachel's agreed to, Leon and his cronies decide that it's time for some direct action and start hurling bricks through the classroom windows. This is the last straw for Tom and he grabs a pair of wire cutters from the builder's hut before setting about the barbed wire barricade. He can't believe it when one of the builders orders him to stop and then confiscates the cutters because he's not insured to work on the site. Storming back into the school, Tom runs into Davina. He's in no mood for her attempts to calm the mood with flippancy and tells her so. Davina heads off to confide in Jasmine - she's got a bad feeling about how it's going between her and Tom; everything she says just seems to wind him up.

With a staffroom of traumatised teachers on her hands, Rachel decides that it's time to contact the police. In the meantime, Eddie decides to get stuck in and goes to tell the kids that if they don't come down, they'll be arrested. Eddie's hard line gets results and one by one, the kids climb out of the tree. Even Brett's had enough and he urges Mika to reconsider - she's not doing this for the planet, this is all about her battle of wills with Tom. As he realises that Mika's not going to budge, Tom gets a ladder and starts to climb the tree. Egged on by Leon, she lashes out and kicks the ladder away. Tom hits the ground, completely out for the count and Mika's hysterical, convinced she's killed him.

Later, Mika apologises to Tom - no more eco-terrorism. He accepts and promises that in future, he'll treat her like an adult. He tells both girls that he doesn't want them to stop doing what they care about. As long as it doesn't affect their schoolwork, they can follow their passions. Egged on by Jasmine, Davina asks Tom out for dinner and is crushed when he declines. It looks like his renewed focus on the girls has left her frozen out. Meanwhile, Eddie agrees to retract his resignation, but he refuses to work with a blackmailer. He shows Rachel the bounced cheque. She's in turmoil, but resigned to do the right thing, she agrees to report Hordley to the council. Eddie can't hide his relief when she picks up the phone. Little does he know that the Council secretary taking Rachel's urgent message is actually a very confused employee at the local Chinese takeaway...