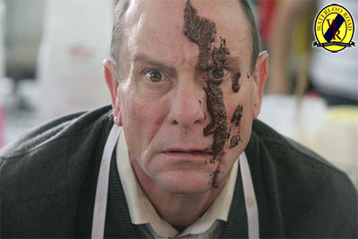 Jasmine's return signals the last day at Waterloo Road for Wilson Bingham, the supply teacher covering her classes. Tom's not happy to see him go, he's a great teacher and the kids love him. Eddie promises to have a word with Rachel - if Wilson really is that good, it would be a shame to let him go. It seems that Wilson has made an impression on more than just the staff though. Janeece has fallen for him big time, and it appears he feels the same way about her. He tells Janeece that they must keep their relationship a secret until the end of the day, but she can't keep her mouth shut and confides in a disbelieving Chlo.

Grantly is much more of his curmudgeonly self than usual when Rachel asks him to organise the catering for the Governors' AGM lunch. As well bad boys Bolton and Paul, Grantly will have to supervise minxy duo Aleesha and Danielle, both of whom see themselves above such menial work. Peeved when Grantly puts the 'B brains' in charge of the chocolate cake, they decide it's time for payback and tip a shed-load of baking powder into the cake mix. Things go with a bang when the doctored cake explodes all over Grantly. He's had enough and throws in his apron. However, he has second thoughts when he learns that there might be something in it for him - a free slap-up meal courtesy of the Governors. Employing a strategy of divide and rule, he soon has the kids cooking up a storm. Aleesha and Danielle look on in disgust as he takes all of credit for their hard work.

Brett's 'noticed' that Eddie is now getting lifts into work from Davina - has his conscience been pricked? Eddie's in no mood to be wound up and scoffs - a bit of criminal damage isn't going to change his mind. Eddie's mood doesn't improve when he sees that Hordley's JCBs have finally rolled into the school grounds. After his late night discovery, Eddie has checked out Rachel's criminal record using her real identity and is appalled by what he finds. He challenges Rachel about his discovery - how are the parents going to react when they discover that their kids' head teacher used to be a prostitute? Rachel tries her best to explain the circumstances, but Eddie's not listening.

Wilson keeps Janeece back after class to tell her he's booked a hotel room for them in Manchester. They're almost caught in the middle of a snog by Steph who immediately susses that something isn't right. She's not sure what's going on, but she doesn't like it and warns Wilson to stay well away from Janeece. Sure that Wilson is taking advantage of his position, Steph approaches Tom. Tom's convinced that Wilson's a top bloke and, thanks to his own experience with Stacey, he thinks it's just a case of Janeece getting caught up in her own fantasy world.

Prompted by Jasmine's discovery that Wilson has been seriously over-grading Janeece's coursework, Rachel contacts the supply teacher agency. Steph's worst fears are confirmed when Wilson's details are faxed through and the photograph looks nothing like him - the man calling himself Wilson is an imposter and, even worse, he and Janeece have disappeared! Unaware that Rachel has contacted the police, Wilson continues to impress Janeece by taking her shopping in Manchester and kitting her out in a designer dress. Janeece is over the moon - she's never had a real boyfriend before - and when she walks into the classy hotel room Wilson has booked and clocks the champagne and flowers, she goes into orbit. Of course, as soon as Wilson gets what he wants, he cruelly dumps her - did she really think he was going to leave his wife and family for her? Alone, devastated, and left without her clothes, Janeece makes a hysterical phone call to Maxine.

Steph, Tom, and the police race to the hotel where they find a humiliated Janeece in tears. As Steph comforts her, Janeece tells the police that she saw a sticker for a local caravan park in Wilson's car. There's no-one home when the police, Steph, and Tom get there, but Tom's on a mission and, after finding a spare key under the doormat, enters the caravan. To his and Steph's horror, the walls are plastered with pictures of young girls, including Chlo. Tom goes ballistic and, spotting steam coming out of the kettle, realises that Wilson can't be that far away... he's not, but when he tries to make a break for it, Tom spots him and sets off in pursuit, laying in with his fists until the police drag him away. Wilson is led away to a waiting police car.

After doing some Internet research, Eddie becomes convinced that Rachel must be in cahoots with Hordley over the building of the new training centre... has she slept with him? Rachel is appalled by the idea - there's nothing going on between them. Hordley got the contract purely because his bid was the best. Eddie's not satisfied by Rachel's denials and gradually the penny begins to drop - Hordley must have blackmailed her. When Rachel continues to deny everything, he threatens to take what he knows to the LEA. Rachel finally admits the truth and Eddie's incredulous - either she reports Hordley, or he resigns. Rachel tries her best to bluff it out, telling Eddie that the idea of her sleeping with men for money is what he really can't handle. Whatever the real reason, she's stunned when Eddie resigns on the spot...